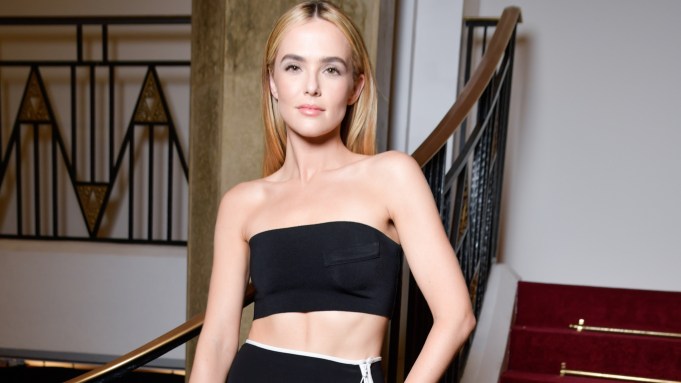 On Tuesday night the actress attended a screening for “Not Okay” in Los Angeles wearing a sequin minidress by Valentino in the label’s now-signature magenta hue. She wore silver glitter platform heels also by the Italian brand.

She was styled by Elizabeth Stewart, who also works with the likes of Jessica Chastain, Viola Davis and Julia Roberts.

Deutch uploaded a carousel of pictures, taken by celebrity-favorite photographer Amber Asaly, posing on a balcony overlooking the L.A. skyline with Quinn Shephard, the movie’s director, who was wearing an outfit by Heavn.

“✌️ days until u meet danni sanders,” the actress wrote in her caption.

“Not Okay,” which premieres Friday on Hulu, follows the story of a desperate influencer named Danni Sanders who fakes a trip to Paris to earn more followers, but gets caught up in a lie when a terrorist attack occurs and people mistakenly assume she is one of the survivors.

Earlier this year, O’Brien and Deutch previously starred in the crime drama “The Outfit,” which follows a Chicago-based tailor whose primary customer base is a family of gangsters.

This week, while doing press for “Not Okay,” Deutch uploaded a few pictures of herself looking in the mirror as she wore an orange fringe-trimmed tank dress by Giorgio Armani.

The actress gained recognition for starring in movies such as “Before I Fall,” “Everybody Wants Some!!” and Netflix’s “The Politician” and “Set It Up.”