Zooey Deschanel told WWD she just got back from a belated honeymoon with Death Cab for Cutie frontman Ben Gibbard. 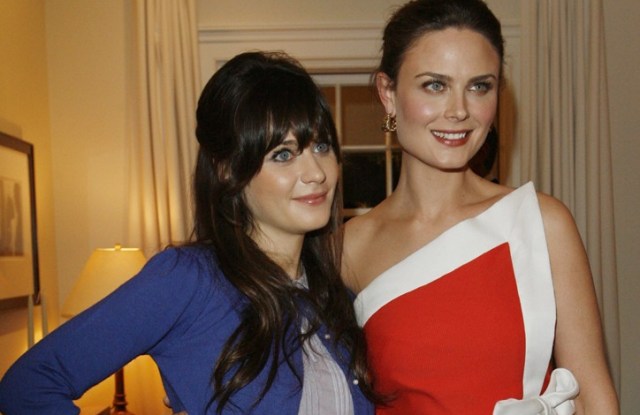 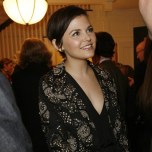 RAINING CATS AND DOGS: Despite the pouring rain and a slew of holiday parties going on around Los Angeles Saturday night, Zooey and Emily Deschanel drew a crowd for a party sponsored by Vanity Fair and Cotton Incorporated at the home of Creative Artists Agency managing partner David O’Connor. In a pastiche of her own vintage cotton pieces, Zooey held court on the wraparound porch, accessorized with a red and white polka dot umbrella and her husband, Death Cab for Cutie front man Ben Gibbard. “We just back from a belated honeymoon in Hawaii,” she said. “It rained there too.” Meanwhile, her older sister, Emily, snacked on vegetarian pizza fireside in the living room while chatting with her pal Ginnifer Goodwin. Both actresses support the evening’s beneficiary, the Humane Society of the United States. “I love animals, so obviously I’m for wearing cotton as opposed to fur, wool or leather,” said Emily, clad in a vintage dress from The Way We Wore. On display were more vintage cotton looks from the store, including those worn by Zooey in the film “(500) Days of Summer” and Kate Hudson in “Almost Famous.”

FELLOW SISTERS: Rodarte’s Kate and Laura Mulleavy picked up an early holiday surprise Monday night at The Broad Stage in Santa Monica — they were among the 50 recipients of the 2009 United States Artists Fellowships. Sculptor Diana Al-Hadid, playwright and theater director Nilo Cruz, hula master Hokulani Holt-Padilla and poet and novelist Sapphire, whose novel “Push” was made into the recent film “Precious,” were some of the other honorees who were awarded $50,000 grants. This year’s winners hailed from 18 states and range in age from 28 to 82.

FUNNY VALENTINE: Spurr will have its first show during New York Fashion Week, on Feb. 14. In another first, the emerging men’s wear label designed by Simon Spurr will travel to Milan for appointments during men’s fashion week there.

DINNER DATE: Though Muse cover star Lindsay Lohan didn’t show up, a few subjects photographed in the magazine attended a dinner hosted by Armani Wednesday night at the Armani Ristorante at its Fifth Avenue flagship. Vogue’s Sally Singer, the members of Au Revoir Simone, chocolate makers The Mast Brothers, and PR Consulting chief Pierre Rougier all held court at the dinner. The four were photographed in Muse for a portfolio of 12 New York faces, which also included Lola Schnabel, Lake Bell and Missy Rayder. Also making the scene at dinner were photographers Patrick Demarchelier, Craig McDean, Greg Kadel, Yu Tsai, who shot Lohan for the issue, and Mario Sorrenti, who mingled with Aerin Lauder and Pascal Dangin, among others.

BOWLED OVER: More than 150 of Los Angeles’ social set poured into Oscar de la Renta’s Melrose Avenue store Tuesday night for Hamish Bowles’ book signing for “The World in Vogue.” The designer could not be there, but his designs were well represented, thanks to co-hosts Alexandra Kimball, Lisa Love and Katherine Ross, who wore his creations. Guests such as Liberty Ross and Ione Skye helped further the cause. De la Renta’s appeal with a cross-generational crowd could be seen in the turnout, which included Brooke Davenport, Joan Collins, Betsy Bloomingdale, Barbara Davis, Gela Taylor, Gelila Puck, Jamie Tisch, Jenni Kayne, Liza O’Brien, Lulu de Kwiatkowski, Victoria Brynner, Elizabeth Wiatt and Eva Chow.

REYTER FOR MASS RETAIL: Los Angeles jeweler Adina Reyter, known for her simple signature circle pendant design, has rounded up a big partner in Wal-Mart. She has created a collection for the Love, Earth jewelry line that uses mining and manufacturing facilities adhering to the retailer’s sustainability standards. The debut collection of around 16 pieces, including a $38 sterling silver brushed disc ring and a $58 twisted circle pendant necklace out of sterling silver and 10-karat gold, is rolling out across the Wal-Mart chain and is being sold online. Reyter isn’t affiliating with Wal-Mart for a fleeting gig like jewelers Dominique Cohen and Dean Harris did with Target for that retailer’s Go International program. Instead, Reyter’s involvement with Wal-Mart is expected to be long-term, although neither she nor the retailer would divulge details. Reyter started Adina Design Inc. in 2001 and her namesake jewelry line, which runs from roughly $40 to $1,000-plus, has been picked up by boutiques across the country such as Diane Merrick, Belle Gray and Jennifer Kaufman in Southern California.

CARRIAGE TRADE: Les Airelles, the five-star hotel in Courchevel, France, is offering its guests the opportunity to get around the glitzy ski area in a one-of-a-kind horse-drawn carriage created by Hermès. It’s outfitted in bull calfskin treated to be waterproof and withstand extreme cold, with the interior in the same brick-colored leather. Delivered to the hotel in time for its seasonal opening last week, the carriage is at the disposal of guests free of charge on a first-come, first-served basis. Mind you, hotel rates run around 1,000 euros per night, or about $1,460.

BIBA’S NEXT CHAPTER: Biba, the London label founded in 1964 by Barbara Hulanicki, is set for yet another revival. House of Fraser, the British department store chain, has acquired the rights to the Biba brand from Lichtenstein-based company Hachel International Foundation, for an undisclosed sum. The company plans to relaunch the label under the name Biba Collection for House of Fraser for fall 2010. “The addition of Biba to our portfolio of brands fits perfectly with our strategy to further develop our house brands,” said John King, chief executive officer at House of Fraser.