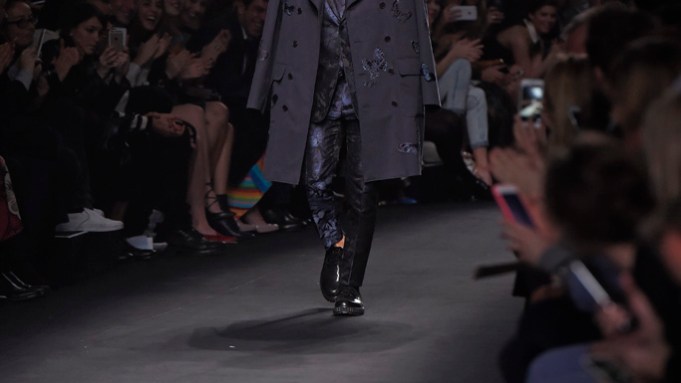 PARIS — Blue Steel is back.

Ben Stiller and Owen Wilson confirmed they were reprising their roles as male models Derek Zoolander and Hansel McDonald in a sequel to the cult comedy “Zoolander” with a surprise appearance at Paris Fashion Week. The pair emerged at the end of the Valentino show and strutted down the catwalk to the sound of The Human League’s “Don’t You Want Me,” throwing the signature Blue Steel look at cameras and prompting loud cheers from editors and celebrity guests including Kate Mara, Olivia Palermo and Nicky Hilton.

On their way back, they both dramatically dropped their coats on the runway, with Stiller grabbing a cellphone from a front-row guest and filming himself. The actors made a quick exit after the show, avoiding waiting photographers and press.

Later in the evening, Stiller told WWD that filming starts in Rome on April 7, and that the seven-year-old Valentino documentary, “The Last Emperor,” inspired him to film the sequel in the Eternal City. “Rome is the most cinematic environment,” the actor said.

According to a tweet from Paramount Pictures, the film will be released on Feb. 12, 2016. Ignazio Marino, the mayor of Rome, posed alongside Stiller in photos posted to his Facebook page last month, revealing that an American and Italian cast would be filming over 12 weeks at the Cinecittà studios and in external locations in Rome. According to Deadline.com, Penelope Cruz will be one of the female leads in the film, which is being written by Justin Theroux.

As for Stiller, how has male modeling advanced since the original 2001 movie?

“There’s been 15 years of practicing,” he said, joking that the posture is “stretched out a little bit.”

Stiller declined to say if any real fashion people might make cameos in the new movie, as the likes of Karl Lagerfeld, Tom Ford, Donatella Versace and Tommy Hilfiger did in the original. But rumor has it Lagerfeld and Anna Wintour are among those solicited to make appearances — and Stiller last fall was overheard talking with Ralph Lauren about potentially making a cameo.

After Stiller arrived at the party, he and Wilson joined Valentino creative directors Maria Grazia Chiuri and Pierpaolo Piccioli for a jumping portrait, spoofing a scene from the original movie.

Clotilde Courau was sorry she missed the show, but caught up via social media. “It’s amazing how the whole thing went viral,” the actress said. (More than 100,000 comments on Instagram within an hour, the house confirmed.) Courau said she thought both characters were genius and let slip that Piccioli might get a cameo.

Following a whiff of a standoff on the Valentino catwalk between himself and Stiller, Wilson was undecided about who had won the duel. “Oh, I don’t know. It looked like a draw to me. What did you think?” he said.

The Hotel Salomon de Rothschild was decked out for the party with a delicious Bracchian table in old Roman fashion amid antique furniture and ornamental lamps from the school of Lalanne. It wasn’t long before guests including Christian Louboutin and Mara took to the dance floor throbbing with Blondie’s “Heart of Glass.”

Stiller’s and Wilson’s appearance at Valentino was the talk of the shows on Tuesday — as was the possibility of another “Zoolander.” Asked about the original movie, Alber Elbaz replied simply, “I love.”

Hilton called the surprise catwalk appearance “genius marketing.” “Paris [her sister] was actually in ‘Zoolander 1.’ Ben [Stiller] was so ahead of his time. He knew who Paris was before she became Paris Hilton.”

“Oh my gosh! Very unexpected,” said Mara of Stiller’s and Wilson’s walk down the runway. “That was so epic. And of all shows you would not expect them to be in this show, which was just, like, the perfect marriage. I loved it.”

“Just two great actors fooling around, playing around with the idea of fashion,” enthused “Rain Man” actress Valeria Golino, who was also caught off guard.

Of course she’s a fan of the film.

“It’s impossible to resist,” she said. “And even when you don’t like that kind of movie, you cannot not like ‘Zoolander,’ no?”

Her favorite scene: “Probably the duel between the two.”

Chiuri said the actors came up with the idea for the stunt. “We met them and there was a good relationship,” she said. “We said, ‘Why not?’”

Piccioli said it was all in good fun. “We love fashion. We think that we have to have fun. I mean, that’s what fashion is for,” he argued. “We work seriously, but we don’t take everything so seriously. It’s something different.”

It is not the first time Hollywood has used Paris Fashion Week as a backdrop. Director Robert Altman recruited designers including Claude Montana, Thierry Mugler, Sonia Rykiel, Jean Paul Gaultier and Christian Lacroix, together with a slew of models and celebrities, to appear as themselves in his 1994 satire “Prêt-à-Porter.”

Sacha Baron Cohen made a stir during fashion month in 2008, causing a commotion backstage at Iceberg in Milan; disrupting a Jean-Charles de Castelbajac show; and hamming it up at Stella McCartney’s show dressed as his alter-ego Brüno, a gay Austrian fashion show presenter and the title character of his 2009 film “Brüno.”

Neither generated the excitement that Stiller and Wilson did, though — in fact, Altman and Cohen stirred more resentment than admiration.

But for those wanting more details, so far all involved are remaining relatively mum. Reached for comment in Los Angeles on Tuesday, “Zoolander 2” producer Stuart Cornfeld declined to discuss what designers would be involved in the movie — or anything else about it.

“We’ve pretty much got our fashion thing happening,” he told WWD.

As for the budget, Cornfeld responded, “I don’t like when people ask how much a movie cost. It costs $12 at the box office, that’s what it’s all about.”