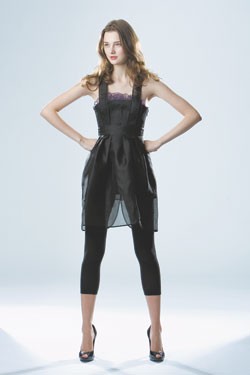 Dresses have been gaining momentum for several seasons. Now that spring merch is about to hit the racks, retailers expect the category to soar, and their high hopes have significant foundation. Many women started embracing dresses as something more than a novelty only last season, so their lust for the silhouettes is far from satiated. They love the ease of slipping into a frock and the fact that they can do so while working other trends of the season, such as futurism, romance or metallics. Scores of designers have expanded their offerings to include a wealth of day looks that should be adaptable to even the most staid work environments. WWD surveyed the fashion directors of major stores to learn what dresses they’ll be pushing and pulling for as spring blossoms on the selling floor.

“It’s really become the new uniform for spring-summer,” agrees Roopal Patel, Bergdorf Goodman’s fashion director. “Whether it’s about volume, patch pockets, topstitch or the chiffon overlay and trompe l’oeil effects that we saw at Chanel, every woman has a choice to suit her body.”

Dresses have always been in the mix, but not at this level of ubiquity. Ken Downing, Neiman Marcus’ senior vice president and fashion director, points out that until very recently, sportswear and separates had long dominated collections. “The idea of a dress really felt new to our customer last season,” says Downing, who names Oscar de la Renta’s and Stella McCartney’s dresses, paired with a cropped jacket and flat shoes, as standouts of the season. “She likes things that are very pretty and put together. So when we started bringing dresses into the store, she was excited.”

Likewise at Macy’s, which predicts that Anna Sui, Twinkle by Wenlan and Betsey Johnson dresses will be big for spring. “It’s about the pleasure of being a woman,” says Nicole Fischelis, vice president and fashion director of Macy’s East. She notes that, while Macy’s has done well with fall dresses across the bridge, better and contemporary categories, different silhouettes suit the various markets. For example, Empire and smock styles do well with the contemporary customer, while bridge and better customers seek sheath and shift dresses.

Calvin Klein and Vera Wang both recently launched better and contemporary dress collections with their white and lavender labels, respectively. In November, Gap sold out of Roland Mouret’s capsule collection of dresses in just a few days.

“I think the reason it keeps gaining momentum is the ease factor,” says Saks Fifth Avenue vice president and women’s fashion director, Michael Fink, who predicts chic day dresses from Valentino and Oscar de la Renta will be his store’s number-one spring item. “It’s one-shot dressing that just hasn’t been in the everyday woman’s daytime wardrobe. And we have to remember, we’re dressing people for work, for the most part.”

Nordstrom’s Wheeler agrees that’s the distinguishing factor in this season’s crop, acknowledging that last spring’s offerings were decidedly dressier. “They were beautiful, and it got people’s eyes thinking about it, but the dresses were much more occasion-oriented,” she says. “Personally, when I was looking at the dresses, I was like, I love this; probably couldn’t wear it to work.”

But office-appropriate attire exists on an ever-changing spectrum, and conventional lines continue to blur. “There aren’t that many rules as to how and where you can wear a dress,” says Patel, who predicts that Bergdorf customers will incorporate metallics and shine, typically associated with more formal attire, into their daytime wardrobe. “It’s no longer for evening — you can sparkle during the day.”

Henri Bendel vice president and fashion director Ann Watson, whose buy included pieces from Alexia Admor, adampluseve and Jovovich-Hawk, sees her customer as building a wardrobe of dresses. “It’s almost like an accessory,” she notes. “A girl can quickly change her look for the season by layering it over leggings or a racer-back tank. It can take you from spring to fall quite easily.”

And while there’s much to be said for the femininity and ease factors, Julie Gilhart, fashion director at Barneys New York, where customers will see dresses styled as tunics over skinny jeans and leggings, boils the phenomenon down to fashion’s core: design. “The truth is,” she says, “designers are giving us so many great dresses.”