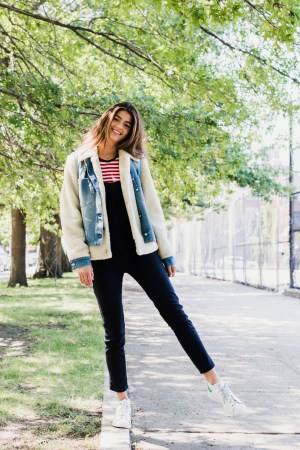 On The Runways and Capitol Steps, Monochrome Prevailed

Inaugural Fashions Set a Course for the Future

We had a feeling that teenagers who live on opposite coasts might just rock a slightly different back-to-school style. So we talked to 14 high school students — seven in New York City and seven in Los Angeles — about their overall approach to fashion, where they shop and what they plan to wear when they return to the classroom in the coming weeks. And then we dressed them in an outfit of their choosing from a selection curated by our stylists on both coasts and photographed them on the streets of Williamsburg, N.Y., and West L.A.

A touch of downtown cool — and in some cases, a bit of preppy polish — and always casual. That was the consensus of the teens in the greater New York City area when asked to describe their respective styles at the Williamsburg photo shoot. Ranging in age from 15 to 18, they showed up in their own outfits — the boys in khakis and polos, the girls in a mix of skinny jeans or shorts with T-shirts and dresses — before being styled in b-t-s looks that suited their fashion preferences.

The students attend a mix of public, private and performing arts high schools. A few have dress codes to abide by, although — with the exception of Dwight School on Manhattan’s Upper West Side, which requires girls to wear turtlenecks or collared shirts — most seem fairly lax. “We just have miniskirts that we have to wear,” said 17-year-old Lili Wahlstedt, a senior at The Spence School on the Upper East Side who usually pairs hers with ankle boots. “It’s pleated and dark gray, so it goes with a lot. You can wear any top as long as it’s appropriate.”

Wahlstedt, a part-time model who plans to study fashion public relations and communications in college, has been interning at Norma Kamali for the past two summers. On weekends, she prefers to dress “as simple and classic as it gets,” sticking to a neutral palette of T-shirts and skinny jeans. “When I wear something tight on the bottom, I like to wear something a little looser on top, like this new silk shirt I have with a high-low hem,” she said. “And maybe black pumps when I want to go out. It’s still casual….I feel more downtown than Upper East Side.”

Juliet DiCarlo, a sophomore at the Grace Church School in lower Manhattan whose mom is an apparel industry executive, also intends to pursue a fashion career after high school. The 15-year-old said she likes to keep up with the trends: “I follow a substantial amount of fashion bloggers and companies on Instagram. I like [the blogger] Sincerely Jules. I love following brands like Rag & Bone and Valentino on Instagram. It’s very inspirational.”

White Plains High School senior Nicholas Guerra, 17, described his suburban school’s dress code as “just nothing too revealing.” He opts for polo shirts and khakis, though he was reluctant to describe his style as preppy. “I get my polo shirts at Lord & Taylor in the [Polo] Ralph Lauren section,” said Guerra, a senior who plans to study computer engineering post-graduation. “I also like American Eagle [Outfitters] and Nautica sometimes.”

Miles Nabritt, a 16-year-old junior at Brooklyn Friends School who is interested in political science, said he also prefers polos and button-downs, adding, “I like to wear bright clothes.”

American Eagle Outfitters emerged as the most popular retailer of choice, especially for denim. “I have this one pair of jeans [from there] that I love,” said Catherine Valencia-McNally, a 16-year-old junior at Suffern High School in suburban Rockland County. “They’re my go-to, favorite jeans. I love boyfriend jeans. I also like skinny jeans with some rips.”

Jane Garrett, a 14-year-old sophomore at LaGuardia High School in Manhattan, cited Brandy Melville, Forever 21, H&M and Urban Outfitters as her favorite places to shop, while 18-year-old Zoe Vorisek, a senior at Dwight School, shops at Rag & Bone, J. Crew and smaller boutiques in her neighborhood, like Olive & Bettes. “I’m preppier than most, I would say,” Vorisek said. “I’m pretty formal; maybe not formal, but I’m never not…polished. I wear jeans, but it’s not a preference. I like wearing dresses — I usually wear longer, flowy dresses.”

Wahlstedt’s favorite stores include Aritzia, Rag & Bone and, for basic T-shirts, James Perse. “I like H&M, too,” she said. “I was recently in Sweden and they have these huge H&M stores and they’re so much better than the ones here in the States.”

In Los Angeles, if anyone expected a snapshot of West Coast b-t-s style to resemble scenes from “Clueless” or “The O.C.,” they’d be surprised to see that it’s more akin to “Beverly Hills 90210” — the original series, not the remake. Back in the Nineties, Brandon and Brenda Walsh dressed like typical teenagers and wore appropriate clothes for the sunny climate. In fact, as our photo session in West L.A. with seven area high school students, aged 14 to 17, showed, some of that decade’s signatures are back in vogue with today’s teens.

“I think a lot of things I wear are really old-school, like high-waisted denim shorts with a sweater,” said Eve Baxter, 14, a freshman at Harvard-Westlake School. Her first-day-of-school look this year? “I’m probably going to wear a miniskirt and either Vans or these Stan Smith sneakers,” she said, “and I still have to go shirt shopping.”

Fifteen-year-old Olivia Giannulli, a sophomore at a westside Catholic school who says her go-to item is a pair of ripped jeans, started her own YouTube channel a year ago. “I’m really into makeup so that’s what [the channel] is mostly about,” she said. “Now a lot of people are starting to look up to me so I try to be a good role model because there’s so many young girls on there.”

Jenelle Smith, 17, wears a uniform to class at Oaks Christian School — a burgundy, white, black or yellow polo and a black or khaki skirt — and the senior says her favorite combo is a black polo with a black skirt and white Converse sneakers. When not in class, she prefers to wear floral printed minidresses.

While 17-year-old Emma Marciano, a senior at The Buckley School, name-checked a few big-time designers in her own outfit — she is, after all, the daughter of two industry veterans, Nathalie and Maurice Marciano — she has to adhere to a campus dress code of a gray or plaid skirt, black jeans, a white polo and a black, red or white sweater. “It’s easier in the morning to put on a uniform and no one’s really judging you on your clothes; it’s more your personality,” she said. “I’ve been with the same people for 13 years so I don’t really care what they see me in, but I definitely try harder on the first day to make a good impression.”

Yasi Guilani, 16, has her first day as a senior at Taft High School all figured out. “I’m going to wear a short black dress, this Forever 21 top [that she arrived in] and my black jellies.”

Santa Monica High School sophomore Mason Beranek, 15, usually rocks vintage T-shirts and Vans, since his preferred method of transportation is his skateboard. “It takes me five minutes or less to get ready. I think spending a lot of time getting ready is a girl thing,” said Beranek, whose parents are both in the fashion industry.

Gus Acord, a 14-year-old freshman at Campbell Hall, said his school dress code limits his options. “We have to wear khaki shorts or pants and a white or blue polo. It’s pretty simple but I don’t mind.”

Most of the L.A. teens said Topshop, Zara and Forever 21 were their favorite places to shop, whether online, in-store or with friends. “I’m more of a solo shopper,” admitted Smith, who also likes Nordstrom, “but I have certain friends I like shopping with because they can help me to make sure I don’t buy the wrong thing.”

Giannulli takes a different approach. “I’m an online shopper for sure — I like Topshop and Asos,” she said. “I’m really bad about going into stores because I get impatient…but I like going into Club Monaco and Planet Blue.”

Marciano shops online as well. “I love Net-a-porter and Shopbop,” she said, “and I like going on sites like Reformation and & Other Stories.”

Guilani’s favorite stores are Nasty Gal, Topshop and Zara. “I like going into stores because I like having the product then and there — because I’ll want to wear it the next day.”