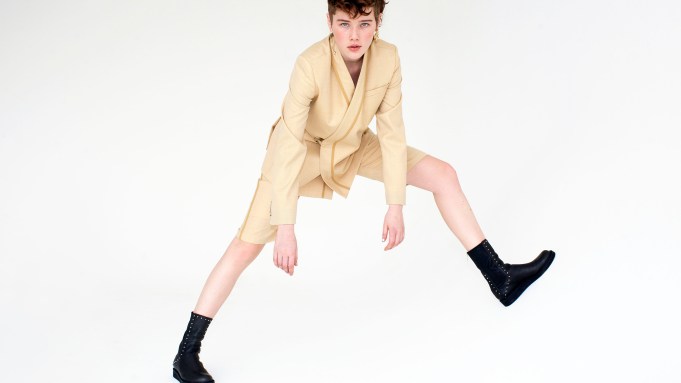 Buyers traipsed all over New York this week to hit the various trade shows to stock up on fall merchandise.

At Coterie, which took place at the Jacob K. Javits Convention Center, some 1,100 vendors were selling merchandise ranging from cashmere sweaters, outerwear and furs to denim, activewear and beauty products. Tom Nastos, president, UBM Fashion, said traffic was very strong. Traditionally, Coterie has run Sunday through Tuesday, but this year it ran Monday through Wednesday. “It started Monday and traffic was up from the previous year,” Nastos said. He said there’s been a lot of order writing activity and some buyers stayed after the show’s closing on Monday night until 7 p.m. to write the business.

Overall, Nastos said vendors are coming off a strong fourth quarter and the general mood is positive. “Consumer sentiment is up and in response to that, brick-and-mortar and online retailers are buying,” he said.

Elsewhere around town, Liberty introduced a women’s show that was connected to Cabana, a fair dedicated to resort and swim, and Capsule at Pier 94 from Feb. 24 to 26.  According to brands and retailers at these shows, traffic was steady and buyers were open to placing orders. Woman ran from Feb. 22 to 24 at Spring Street Studios and also saw steady traffic.

Here, some highlights from the shows.

Backstory: MKT Studio started in France five years ago with pants and band T-shirts. The concept was to bring a rock vibe to the collection. The owners, David Fartouch and Max Uzan, were eager to break into the U.S. market and began working with the Edite Showroom in New York, beginning with the fall 2017 collection. Shopbop is the company’s number-one account.

Key Pieces: The Prince pant, which has a sparkle stripe down the side, band T-shirts, such as The Who and Rolling Stones and suiting pieces. “Everyone is obsessing over this faux fur coat this season,” said Jazmin Gardner, account executive at Edite Showroom, which wholesales for $159 and comes in such colors as blue denim, black, pink, cherry, craie and beige.

Prices: Wholesale price range from $8 for socks to $229 for leather pieces.

Backstory: The brand, which launched in February, embraces an avant-garde, trendy and de-constructivist approach. The philosophy of the line is “One-piece. Two ways of wearing.”

The collection is designed by Christy Huang, creative director and owner, whose inspiration is cubism. “You’ll see angular lines throughout the whole collection,” said the Academy of Art University graduate.

Backstory: Su Kim, designer of the collection, shipped her first collection in 2017. The one-year-old company is based in Los Angeles, and the entire collection is sewn at her father’s factory, Jim’s Design Studio. Her father has been a denim patternmaker for the past 30 years in L.A., starting at the beginning of the premium denim market. The garments are washed at U.S. Garment and First Finish and dyed at Harry’s Wash and Dye. “People call us slow fashion,” Kim said. She said the aesthetic is more playful than a regular denim line. “I wanted to focus more on novelty with good patterns and good fabric.”

Prices: The line wholesales from $25 for a pointelle knit to $81 for basic four-way stretch jeans to $145 for a denim coat.

Backstory: Designer Jill Fairchild started the accessory brand in 2013, exhibiting at Coterie for the first time in 2016. Fairchild started first with luxury handbags with her statement necklaces following shortly after. Her collections walk the line between classic chic and boho and for fall, she has launched earrings.

Backstory: A first-time exhibitor at Coterie, Shoes of Prey designer and cofounder Jodie Fox launched the brand in 2009 as a global multichannel retail brand that enables the consumer to design her own shoes online. The brand has many styles that can be customized, has previously sold through their own web site and a partnership with nordstrom.com. According to Fox, in today’s retail climate, retailers tend to have a large amount of inventory that they cannot move, or the opposite problem with replenishment of stock being an issue. But for Shoes of Prey everything is made on demand and turned around in two weeks, which in terms of retailers means no excess inventory and stock can be quickly replenished depending on sales. Retailers can get exactly what they need, without any surplus.

Backstory: Diane Ducasse, a French designer who’s held stints at Lanvin, Marc Jacobs and teaches at Studio Berçot, introduced her line two years ago. She wanted to create something personal that was a nice balance between masculine and feminine and complemented her existing wardrobe. The collection, which is made in Paris from Italian fabrics, is sold at online specialty retailers including Need Supply and Garmentory.

Key pieces: Ducasse’s collection is always grounded in tailored clothes with feminine flourishes. She showed trenchcoats with draped collars and sashes of fabric tied at the wrist, corduroy cobalt suits, a cotton shit jacket that ties at the waist and was worn over a long, pleated skirt.

Backstory: The 25-year-old line, which was acquired by Meg Co., an apparel, footwear and luggage manufacturer based in Hermosa Beach, Calif., 15 years ago, is inspired by vintage, military uniforms. The line is sold at retailers including Isetan and Mr Porter.

Backstory: Miaoyi Shu, a Chinese Parsons grad, moved back to China to start her line, which is based on Eastern arts and philosophies. The line is currently distributed throughout China and one of its biggest stockists is Yi 23, which is a Chinese version of Rent the Runway. For this season she referenced Daoism and created a fictional story about a girl who was living downtown and partying a lot, so was punished and sent to another planet that was free of indulgences. This translated to 70s-inspired pieces.

Backstory: Based in the Faroe Islands, which sits between Iceland and Norway, Gudrun & Gudrun was founded in 2002 by Gudrun Rógvadóttir, who handles the business, and Gudrun Ludvig, who designs the collection. The brand specializes in sweaters that are made by women knitters on the Faroe Islands. They also partner with women cooperatives based in Jordan and Peru to produce the product. The collection is sold at retailers including Isetan and Anthropologie, but Rógvadóttir is hoping to expand its U.S. distribution.

Backstory: Designer Ronny Kobo initially had a line called Torn by Ronny Kobo that was known for its fashion knits for nights out. But she relaunched the line about a year ago to include wovens. The brand is a favorite among celebrities ranging from Beyoncé to Demi Lovato. The collection is sold in retailers including Shopbop and Intermix.

Key pieces: Kobo played with textures this season and used chenille in a big way. She used the fabric to create fit and flare chenille dresses with stud details and hunter green mock neck maxidresses. The collection also included ruched, off-the-shoulder dresses, striped knit dresses and a leopard set that included trousers and a wrap blouse.

Prices: The line wholesales around $150.