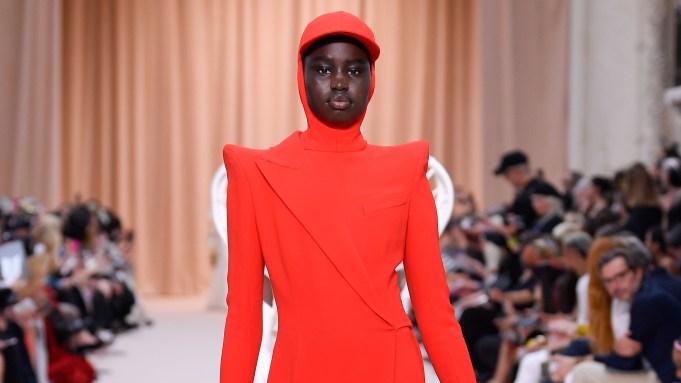 Across the Parisian couture runways, bright and bold colors boasted optimism for the fall 2022 season.

On the runway at Jean Paul Gaultier, guest designer Olivier Rousteing sent monochromatic bold colors — pink, red, royal blue — down the runway while capturing the, “sense of fun and irreverence of the founder’s rollicking shows, exalting the capabilities of the atelier, and ticking off all the reasons the founder is a national treasure in France — and a guiding light for generations of designers,” wrote WWD’s Miles Socha in his collection review, adding the lineup was “A love letter to a fashion legend written with sincerity, humility and originality.”

Brights were abundant at Valentino, too, with creative director Pierpaolo Piccioli’s vibrant and moving haute couture collection. “While Piccioli has left a mark with his recent flurry of monochromatic bright pink designs — worn head-to-toe by most of the celebrities in attendance — the designer shifted his gaze to a rainbow of hues, often in contrast — in addition to the classic Valentino red, and occasional pops of orange, purple and emerald green,” Socha wrote.

“Beauty is resilience, not escapism, and creativity is the only means to contrast dictatorial decisions,” the designer said of his Spanish Steps-set spectacle.

Speaking of spectacle, Balenciaga couture “Won the couture sweepstakes again this season with an electrifying show stacked with celebrity models including Kim Kardashian, Nicole Kidman, Dua Lipa and “Selling Sunset” star Christine Quinn, wrote Socha in his review. Lipa sported a bright yellow, one-shouldered minidress with a lengthy side train on the runway while model Bella Hadid walked in a pouffed green gown.