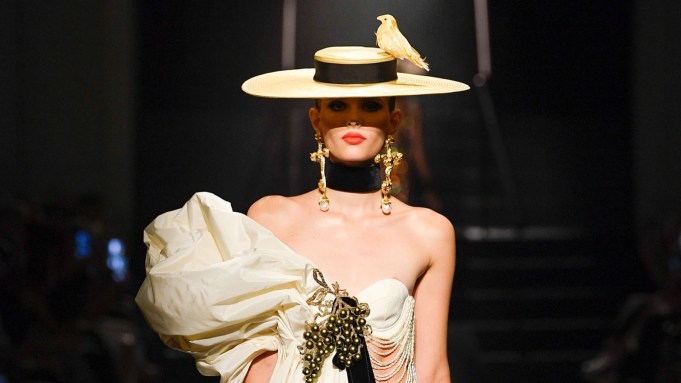 Throughout Paris Couture Week, designers amped up the drama with masterful draping and big volumes. The fall 2022 couture trend sent a message of pure fashion fantasy, seen prominently on the runways at Schiaparelli, where designer Daniel Roseberry debuted styles “steeped in the couture tropes that inspired him as a teen” wrote WWD’s Joelle Diderich. For instance, there was the asymmetric ivory silk taffeta mini-meets-voluminous-maxi dress with grape embroidery and silk black ribbon and vintage pearl embellishments and whirled satin dove gray pouf skirt.

“It’s almost a trope to say that Viktor & Rolf play with structure and volume. But this season they took it quite literally by undressing a model center stage and, with a few strategic twists, changing up the entire look,” wrote WWD’s Rhonda Richford of the collection’s exaggerated silhouettes, seen prominently across jackets and shirts with dramatic lapels.

“A lot of people started to ask me after the first couture, ‘How do we buy couture? Who do we call?’ People don’t know, especially from the younger generation of up-and-coming couture customers that we want to establish a dialogue with,” Gvasalia told WWD’s Miles Socha. “There are a lot of [garments] with volumes that don’t actually need to be made to measure. It’s more about the technique, the material, how it is assembled.”

Speaking to craftsmanship, Iris van Herpen painted “an idealized vision of fashion, where ethereal dresses seem to grow around limbs like ivy climbs a trellis,” with designs “suspended between organic and futuristic, and often defying gravity,” read Miles Socha’s review of the couture collection’s intriguing designs.