Spring is right around the corner, but there are some girls for whom a flirty floral frock clearly won't do. 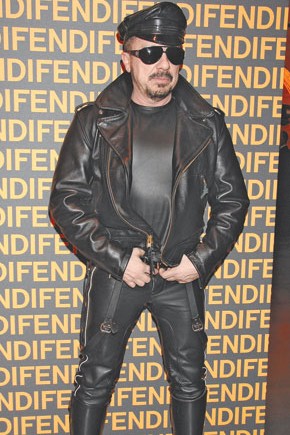 Spring is right around the corner, but there are some girls for whom a flirty floral frock clearly won’t do. At the recent Paris collections, skintight black leather pants formed a veritable uniform for some showgoers. Parisian “It Girl” Alice Dellal was on the prowl, pairing hers with a slouchy jacket, sassy animal-print heels and an equally come-hither deep side part (and head-shave). Rihanna went the figure-hugging leggings route, topping hers with a fitted T and knee-high boots, while Ashley Olsen added that Boho-undone touch with a beaded headband, gray sweatshirt and brown leather sandals. And they’re not the only girls to adopt the biker staple: Vanessa Paradis proved the look can be red carpet-worthy when mixed with a beaded flowy top, while Sarah Jessica Parker has chic-ified hers with a very uptown fur chubby. Of course, there are always those male and female stalwarts who insist on zero compromises when it comes to black leather ensembles. Witness Peter Marino at the Fendi party in full-on Hell’s Angel’s regalia. As Rihanna would say, “Just shut up and drive.”