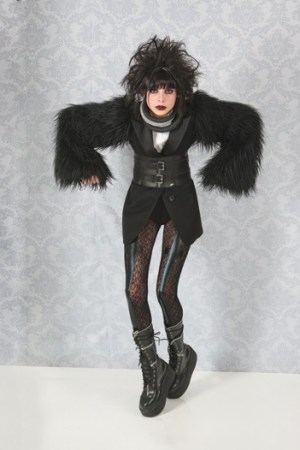 Guests leaving Gareth Pugh’s March show in Paris likely had more questions than answers about the collection. For starters, the designer eschewed the runway for an avant-garde video projection that, though arresting, left fashion editors squinting for a better look at the clothes. A kohl-eyed Natasa Vojnovic vamped, stretched and twisted her way through the video, pulling off clothes and turning capes into flapping wings. Black dresses melted into inky swirls. Sheaths covered with “Hellraiser”-like pins glistened under the arty lighting. But the show made one point crystal clear: Goth lives on.

This fall, there was no shortage of dark glamour on the runways, from Rodarte, where Kate and Laura Mulleavy sliced and spliced their way through a Frankenstein-inspired lineup, to that of eternal Goth guy Riccardo Tisci, who’s managed to transform Givenchy into a fetishistic, Edward Gorey wonderland. But the look resonates at all price points. Consider the fall launch of the L.A.-based contemporary label Witches, by Lauren Alexander and Gabby Applegate, which is geared towards “Goth, grunge and Victorian dressing,” according to the designers. It launched in March with a presentation at the Chateau Marmont on, of all days, Friday the 13th. The line features loads of velvet, silk and black lace, natch.

“When you have houses like Givenchy doing something like that, it makes it more mainstream,” remarks Alexander, who, one may be surprised to learn, cofounded the California basics line LnA in 2007. “That’s why there’s room for us to do something like this and not have people think, ‘This is so weird,’ and roll their eyes, like, ‘Oh, Goth. This person is so depressed.’ Now they think it’s cool and relevant.”

Indeed. Goth has been around for decades, having spun out of the punk movement in the Seventies and reaching a high in the Nineties with Marilyn Manson and movies such as “Bram Stoker’s Dracula” and “Interview with the Vampire.” But that macabre vibe is gaining traction once again, and not just in fashion circles. Nobody needs to point out the phenomenal success of Stephenie Meyer’s vampire-themed “Twilight” series — the film based on the first book grossed $35.7 million on its opening day last November, with the sequel out later this year. Or HBO’s “True Blood,” which gave actress Anna Paquin her first Golden Globe for her turn as Sookie Stackhouse, the undead-loving waitress. (Fan alert: Season two premieres June 14.) And 2010 sees no dip in popularity for the morbidly inclined, even for the PG set. That’s when Emily the Strange, the cartoon poster child for grim types, is slated to get the big-screen treatment.

“Goth has still been relatively underexploited,” says Valerie Steele, director and chief curator of the Museum at the Fashion Institute of Technology in New York, who curated the museum’s “Gothic: Dark Glamour” show earlier this year and is planning a Japanese fashion exhibit for 2010. “Everybody’s been pillaging, say, punk or hip-hop for years; this is still relatively fresh. I think there’s been a growing interest, like, ‘Why aren’t we doing more with this?’ And, I think, the Japanese take has refreshed it.”

Steele is talking about Japan’s prominent Goth figure, the Gothic Lolita, who’s getting the spotlight treatment of late. She’s a different beast altogether from the Western Goth gal here; rather, the GothLoli — or Loli-Goth — is a wonderfully perverse cocktail of “Alice in Wonderland” meets Wednesday Addams. Think petticoats, parasols, ribbons and ruffles — cast in black. And while the term Lolita may tip its frilly bonnet to Nabokov’s girl, no devotee worth her weight in mary janes would acknowledge a sexual undertone to the style. Its origins are more rooted in Harajuku culture — “and the importance of kawaii, of cuteness, in Japan’s popular culture,” says Steele — and champions the covered-up, modest feel of the Victorian age. “It’s almost like they’re trying to transform themselves into living dolls,” explains Tiffany Godoy, co-author of “Japanese Goth” (Universe), a new book on the phenomenon. “It’s about being feminine and lovely and taking tea.”

Godoy’s work is the latest in the spate of English-language books featuring the GothLoli girl — Dakota Lane’s “Gothic Lolita: A Mystical Thriller” (Ginee Seo Books), Masayuki Yoshinaga and Katsuhiko Ishikawa’s “Gothic & Lolita” (Phaidon), and the upcoming “Gothic Lolita Punk: Draw Like Hottest Japanese Artists” (Collins Design) are others — but what sets hers apart is the exploration into the ‘why’ factor of the look, with references to the nation’s Kabuki past and doll fascination. “It’s a culture that’s about escapism and fantasy, and those are kind of the hallmarks of fashion,” she says, noting Gothic Lolita’s rise in the Nineties. “With the downturn of the Japanese economy, post-bubble, there was a certain sense of hopelessness felt by the youth for the first time.” Also key, she adds, is the country’s visual kei band culture, which emphasizes flamboyant and eccentric costuming, à la Kiss and Ziggy Stardust.

If there’s one figure responsible for popularizing the look, it’s Mana, leader of the Japanese band Moi dix Mois, formerly of Malice Mizer. In 1999, after noticing his fans were widely copying his style, he launched his own fashion label, Moi-même-Moitié. He cooked up the terms Elegant Gothic Lolita and Elegant Gothic Aristocrat, too, to differentiate between his women’s and men’s collections. “He’s a major pioneer,” says Godoy.

Nowadays, there’s a whole constellation of Gothic Lolita designers, from Alice Auaa to h.Naoto’s Naoto Hirooka, who has elevated the look to the runway. Four of the eight floors in Tokyo’s Marui department store in Shinjuku are dedicated to the style. And the look itself, much like Western Goth, has multiple subcategories: punk Lolitas, sweet Lolitas and grotesque Lolitas, to name a few. (For the Goth curious, grotesque gals come “injured” and bandaged up.)

“Western Goth responds to a lot of religious imagery and potentially controversial connotations,” explains Carmen Yuen, who’s made a career out of blogging about the Gothic Lolita culture on lacarmina.com. “Whereas in Japan, it’s just an aesthetic. It’s all visual, without the context.” She points to other examples of similarly co-opted looks: Japan’s popular rockabilly or American surf style. “Can you imagine?” remarks Yuen, who now goes by the name Carmina. “California-style board shorts — in Japan?” Even though the Gothic Lolita look isn’t exactly bum-rushing Western shores, it’s begun to filter over. The popular style guide “Gothic & Lolita Bible” — part fashion glossy, part McCall’s pattern book — just launched an English version last year. (Available at Barnes & Noble and Borders, spring 2009 is “The Wedding Issue.”) This August, the Japanese entertainment distributor VIZ Pictures is opening a multistory “J-Pop Center” in San Francisco, which will include a cinema, bookstore and Gothic Lolita shop. The sweet Lolita label Baby, The Stars Shine Bright, meanwhile, has announced plans to open up a store in that city as well. (There’s already one in Paris on 72 Avenue Ledru Rollin.) And Faoflex, an Italian eyewear company, is launching a line called Dandy’s Collection later this month, with one style dubbed Gothic Lolita.

Yuen herself is another example. The 24-year-old Vancouver native, with a BA from Columbia and a law degree from Yale, lives between New York and Tokyo, has a Goth cooking show on YouTube and just launched a capsule collection of Loli-Goth-style coats. Also in the pipeline: a collaboration with London Underground shoes and two book projects. “I go to Gothic club nights,” she adds, “and every single time, there are more and more people. It seems like things are only going to get bigger.” Come March 2010, GothLoli even goes Hollywood; Tim Burton is coming out with his own spin on “Alice in Wonderland,”

starring Johnny Depp as the Mad Hatter and newcomer Mia Wasikowska as Alice.

As for the reason behind all this Gothic attention lately (no matter what its strain), some point to the economy, suggesting it’s a hemline effect of sorts, but with dark and gloomy clothing for a dark and gloomy outlook. For Grai designer Maya Yogev, who used to work at Rick Owens and designed a limited edition fashion collection for Black Sabbath in 2006, the financial connection is a practical one. “It’s more cost-effective for me to do an all-black collection,” she says.

Steele begs to differ. “No, no, no! A million times no!” she responds. “That’s a total knee-jerk reaction. There are always going to be designers, like McQueen, who are going to be attracted to the look of the dark side. There’s something dangerously charismatic about this look — it’s the bad boy, the bad girl, the rock ’n’ roll, this sort of dangerous Baudelairean poet.”

Rodarte’s Laura Mulleavy echoes those thoughts. “People have a connection to different aesthetics all the time,” she says. “In the end, what people will pick for themselves is really a personal expression. People can find beauty, and it could be strange.”