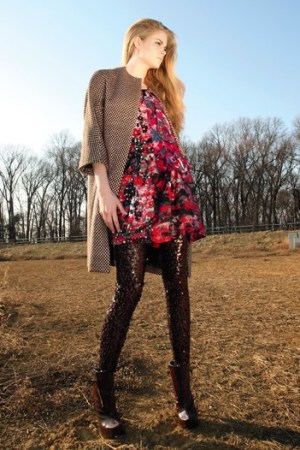 Glam gams have been all the rage for a few seasons now. But this fall, a greater number of labels pushed the limits of legwear design — and “more is more” seems to be their mantra. “Who needs another pair of basics?” asked designer Jillian Lewis. Her labor-intensive paneled tights were initially developed as a costume for dance performers, and now they’re among the most popular pieces in her fall collection. “They’ve been in such demand since the presentation,” she says. At Cynthia Rowley, where a recent partnership with the United Legwear Company has created a surge in hosiery offerings, a pair of embellished fan-print tights were stunners on the runway. “People talk of risk in this environment,” says Peter Arnold, president at Cynthia Rowley, “but fashion offers an escape. There always needs to be an element of fantasy.” And there certainly is in hose. United Legwear is even producing a slick set of tights decorated with heat-transferred nail heads for the company.

The season’s elaborate legwear may not be for the faint of heart, and with bells and whistles like Swarovski accents and Italian leather patches, the prices certainly aren’t for the shallow of pocket. Michael Angel’s pair of crystal-decorated leggings will set customers back $395 at retail, while at Diesel Black Gold, Renzo Rosso’s patchwork leggings will go for $550. And Lewis’ cut-and-sewn leggings will retail for a whopping $695. “Yeah, they’re expensive,” she acknowledges. “But the psychology today is, when it comes to opening our wallets, it better be worth it.”