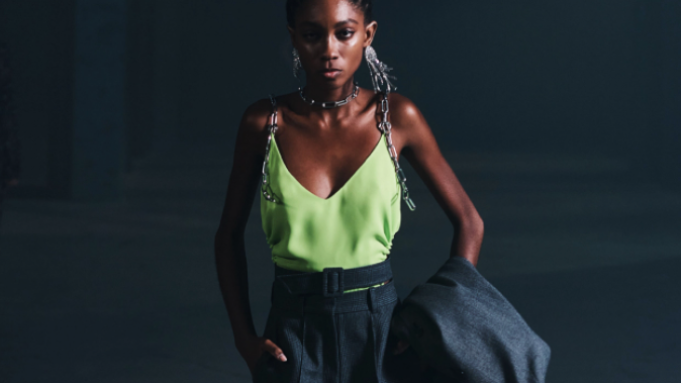 In a year that has completely reshaped how we view the workplace, designers like Louis Vuitton, Fendi, Jil Sander and Nina Ricci responded in kind for fall with updated and reimagined business dress codes. On this last day of Women’s History Month, WWD highlights the women’s suiting designed to empower its wearer — in the office and elsewhere.

Speaking to his inspiration for his debut collection at the renowned Italian house, Kim Jones said, “The Fendi family are women of intellect who work hard — and that’s what I wanted to celebrate.” His new take on power business articulated that sentiment, and the dressing felt chic, timely and purposely feminine.

Lucie and Luke Meier at Jil Sander strongly believe that clothes should be tools that enable individuals to express and empower themselves. Their pristine suiting silhouettes paired with long pleated and fringed maxiskirts brought a new fierceness to the board room.

And at Chanel, brand purists found plenty to obsess over. When it came to the traditional signature business suits, many were paired with chunky snow boots with contrasting toes, injecting a harder edge into the pastel double breasted ensembles.

In the Tory Burch universe, the return to the office post-pandemic involved classic men’s suiting that was sharp and clean with a ’70s flair. Burch’s signature feminine touches, including belting details and sharp-collared cotton poplin shirts, naturally were present as well. The designer described the collection as, “Timeless pieces that are grounded in the reality of how women want to dress.”

And what could be more empowering than that?