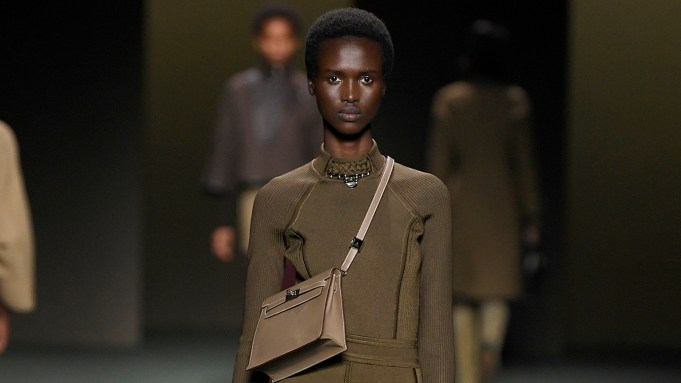 The classic knee-high boot or even higher was the dominating footwear message from the fall runways. The inspiration ran the gamut from retro futurist metallic styles at Courrèges to more functional pairs grounded in outdoor activities such as fishing at Chanel or horseback riding at Hermès.

Hermès designer Nadège Vanhee-Cybulski struck the balance between sensuality and practicality with her fall collection. “It’s about a woman being assertive in their femininity, and owning her body,” the designer said. Vanhee-Cybulski presented the body-con side of equestrian with a lineup of fitted cat suits, skin tight tops and leggings worn with thigh-high tights and flat boots. The looks were modern and timeless, giving the Rive Gauche woman a cool edge. “It’s a fusion of tradition and modernity. We have to know where we come from and who we are, but it’s also good to have the unexpected, and to be confident,” the designer said, and confident the Hermès woman is.

Isabel Marant, an expert on making the boot the star of any outfit, grounded her collection with over-the-knee boots, accessorizing the looks with a sense of protection and glam. The footwear was presented in a range of colors and finishes, from solid black to metallic shades and paired with ultra-short miniskirts, knit dresses, baggy outerwear and in some cases as stand-ins for pants. A padded style with an articulated knee and quilting effects worn over an allover denim look gave a utility spin to the offering.

For Courrèges, the iconic ’60s and early ’70s futuristic heritage of the house was in full display in a head-turning lineup of over-the-knee boots in patent leather on a variety of colors. A white minidress with side cutouts and matching white leather boots looked as modern and groovy today as it did a few decades ago.

In the case of Roberto Cavalli, designer Fausto Puglisi infused an element of femininity with 3D-cutout flowers embroidered on a pair of seafoam green leather boots that gave a touch of hardcore artisanal to the trend. Sacai, Givenchy, Germanier and Balenciaga, to name a few, presented some of the highest and most statement-making boots of the season.