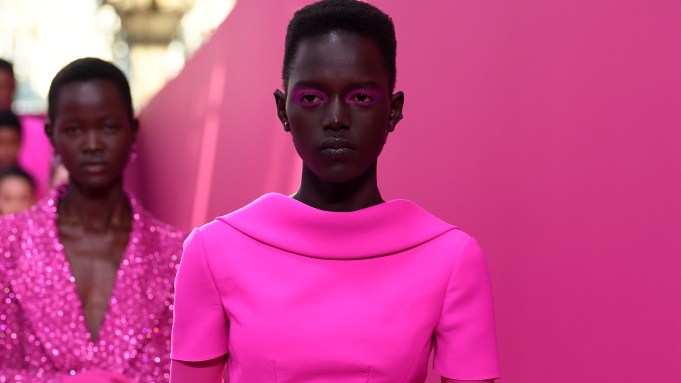 Bright monochromatic dressing, a favorite fall trend among key retailers, brought powerful messages of energy and glamour to the season. Some vibrant examples ranged from a pink faux fur coat and matching cocktail dress at Michael Kors to a vivid red sleek dress and tonal high boot at Courrèges to a novelty take on a yellow tracksuit at Matty Bovan.

It was designer Pierpaolo Piccioli who took monochromatic pink to a whole new level. “Pink PP” is a new Pantone color created by Picciolo himself for this season. “Pink is a color I really like, and it’s also a color that can have different sides. It can be sweet, sexy, powerful and rebellious,” the designer said about the hue.

“I wanted to work like a monochromatic artist. When looking at one color, you have to go deeper than the surface, to texture, cuts, silhouette, volume and detail.” His view on the monochromatic trend resonated among retailers.

“Valentino’s ode to love with the use of monochromatic shocking pink shone a light on the dramatic silhouettes and craftmanship of Pierpaolo Piccioli — it was amazing to see the collection in such a pure way. Tonal dressing has been a standout trend across fashion month,” said Elizabeth von der Goltz of Matchesfashion. “The Valentino show was stunning, the Pink PP Pantone shade that took over the entire venue and most of the looks provided a well-needed optimistic pop of color,” said Net-a-porter’s Libby Page.

The power of red was also very present this season with the likes of Wes Gordon at Carolina Herrera. His fall show included a great array of red bathed eveningwear gowns, some of which were big hits on the Oscars red carpet already where bright red became the overriding trend.

Courrèges’ designer Nicolas Di Felice also played with monochromatic red. He used the technique as a way to enhance his graphic minimalism message and delivered a chic and unapologetic sexy lineup. Some other monochromatic red lovers included Sacai, Chanel and David Koma, to name a few.

For the yellow lovers it was Alexander McQueen designer Sarah Burton who delivered the goods. Everything mushrooms has been trending over the past few seasons, becoming a fashion favorite. Their beautiful shades of yellow and orange were the inspiration Burton used for the trippy yellow gowns and suits that pushed the monochromatic trend to a most dynamic and happy space.

For more trends of the season, see:

Proportions Play Out in Maxi Coats

Maxi vs. the Mini