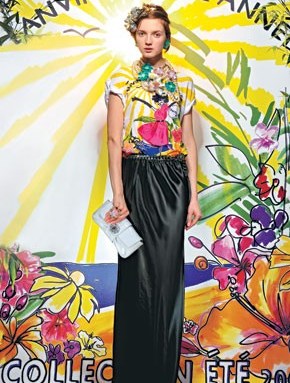 Chez Lanvin, it’s Hawaii meets the Hamptons. Well, sort of. Alber Elbaz described his cruise collection as a Frenchified take on American sportswear, with plenty of that South Fork easy allure. “But twisted Hamptons,” he noted while tucking into a bowl of sorbet to the helium strains of Dolly Parton at his Paris studio on Saturday. Shapes are light and languid, not to mention a bit Thirties with an emphasis on a new elongated silhouette for the house. Case in point: his polkadot silk gazar column gown worthy of a latter-day siren à la Jean Harlow. Add to that the designer’s cheekily embroidered T-shirt matched with a formal floor-length silk skirt and his “jogging suit for the woman who doesn’t jog” cut in sexy black silk and you get the rest of the season’s message: carefree glamour.

But, oh, the accessories: it’s “Aloha, Alber” with exotic and flamboyant — or, in his words, “screaming” — embellishments spicing up the collection. Especially notable are his versions of a luxury lei: glitzy garlands made from iridescent flowers strung on fake pearl necklaces.