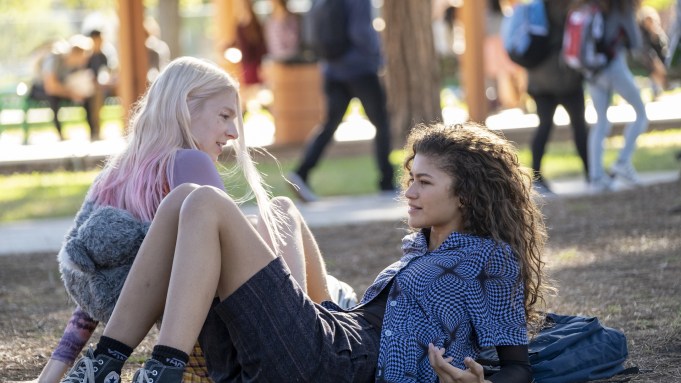 Midway through its second season, HBO’s “Euphoria” continues to drive the cultural conversation.

The show has helped skyrocket not only its star Zendaya, who received an Emmy for Outstanding Lead Actress in a Drama Series for season one, but also a host of other breakout stars in the ensemble cast, including Hunter Schafer, a current Prada model, Jacob Elordi, Sydney Sweeney and Barbie Ferreira, named a U.S. ambassador for YSL Beauty this week.

The high school-aged characters’ stories are pushed forward not only by the acting chops of its cast, but are also driven by the costumes that help tell a story of contemporary youth culture.

The show’s take on fashion sees a mix of Y2K throwbacks and ’90s nostalgia, remixed with one-of-a-kind vintage scores and selections from a who’s who of emerging design talent. It’s a formula crafted by costume designer Hedi Bivens, who has two Emmy Award nominations for Outstanding Contemporary Costumes under her belt.

Viewers frequently look to the TikTok hashtag #EuphoriaHighSchool and Instagram account @closetofeuphoria, which boasts 31,000 followers, to meticulously dissect each piece and figure out where to score it.

The second season’s story begins just a couple of weeks after the first ended, but the characters’ styles have evolved to include legacy names like Jean Paul Gautier, pulling from designer archives as well as current stock. Up-and-coming designers pump up the volume on the show’s fashion fantasy factor, and being featured on the Emmy-winning series can create buzz and put a designer on the map for the Gen Z customer and retail buyers.

This season may be half over, but wake of the show will continue to shape trends until fans can tune into the recently greenlit season three.

Here, WWD curates pieces that would make the grade at #EuphoriaHighSchool.