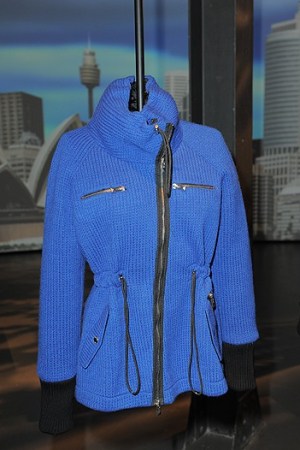 Hogan declared fall open season on the great outdoors, a theme well suited to the house’s sporty nature. All-weather boots done in a streamlined Sorrel style set a rugged, countrified tone that crossed over to excellent shearling handbags and shoes. The look got more refined on suede mary janes and lace-up wedge booties, some decorated with metallic paint. That effect worked especially well on the new Bi Bag, named for its dual properties: two fabrics, two zippers and two ways to wear it — messenger or hobo style.

But even on her most rustic days, the Hogan woman is more of a city girl. Thus everything was done with a slick, urban edge, epitomized by Thakoon Panichgul’s capsule collection of outerwear, now in its third season. Here, spring’s techy anoraks inspired more serious, tailored versions in coated nylon with an emphasis on hardware. The same notions took a brighter turn in a series of bold blue and black knit parkas that showed  Panichgul’s softer — though no less functional — side and prescient eye toward the economic climate. “I asked myself, ‘How do we cozily protect ourselves?’” Panichgul said.