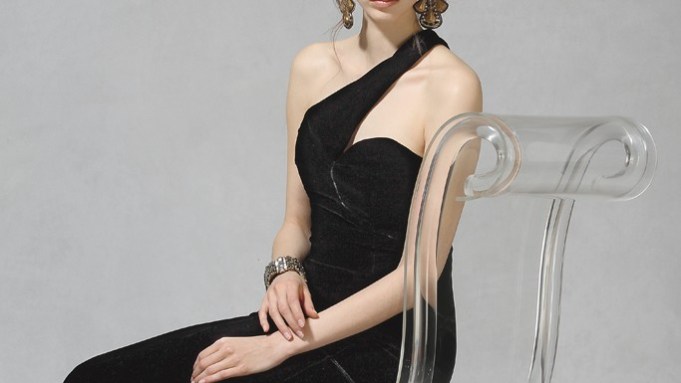 Those are the famous words of one George Costanza, who in “Seinfeld” said he’d do just that if it was socially acceptable. While such a day in men’s wear remains to be seen, the lush fabric is experiencing something of a renaissance in women’s eveningwear.

“I think it’s having a moment because there’s this nostalgic nod to the Nineties happening right now,” Timo Weiland says of the material, which peppers much of his fall lineup. “Velvet was king then.”

Retailers agree: What’s old is new again. “We haven’t seen it in a while,” offers Stephanie Solomon, Bloomingdale’s operating vice president of women’s fashion direction. “Jewel tones were key this season, and velvet takes those colors beautifully. It really epitomizes opulence.” Bergdorf Goodman’s Linda Fargo, senior vice president, fashion office and store presentation, echoes the sentiment. “This fall, there was a trend of dark romance of an almost fairy-tale quality, preoccupied with rich surfaces, deep color and texture,” she notes. “Nothing says that all at once like velvet.”

Still, as many seamstresses can attest, pure silk velvet is one tricky textile to manipulate. Ornery in nature, it’s often difficult to press and steam. It slips when it’s being sewn, and its nap must be cut in one direction — too much pressure leaves a mark on the pile. “We had to show it to three or four different factories because a lot of people won’t work with it,” says Weiland, who was determined to use silk velvet in its traditional form for fall. “It’s the most luxurious type [of velvet] so it’s what we use for evening. It has this wonderful sheen to it.”

Mark Badgley and James Mischka agree, but that doesn’t stop them from experimenting with more modern iterations of the fabric, such as the stretch velvet, cotton velvet and rayon-silk velvet they used for fall. “Of course, silk velvet is by far the most beautiful type, but it damages very easily,” Badgley says. “It’s very old-school, very couture. Not very user-friendly.” The newer blends, on the other hand, solve some of those mechanical issues. “It no longer scars so easily, and it no longer has to be so heavy,” Mischka adds. “It really transcends the old ideas of velvet.”

Despite such technologies, velvet’s traditional surface appeal is what’s driving eveningwear. “It’s very tactile. There’s a richness to it,” says Colleen Sherin, Saks Fifth Avenue’s senior fashion director. “It can certainly be dressed down, but I think people see it as a dressier fabrication.”