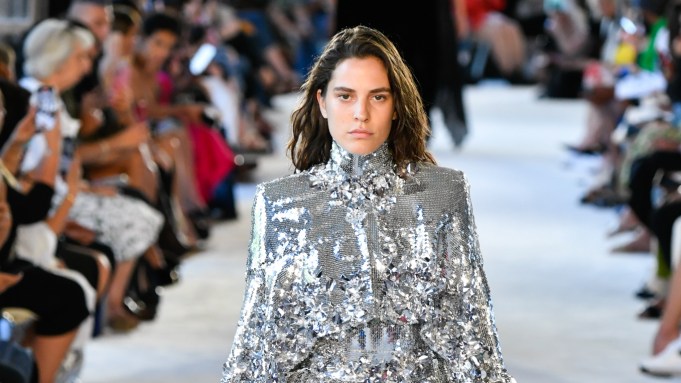 The Paris Couture season was filled with plenty of shimmering and glamorous collections that paved the way for bold metallics to take center stage when it came to couture trends for the fall 2022 season.

With a runway show set to the tone of Grace Jones’ “Nightclubbing,” designer Alexandre Vauthier channeled discoball bling with megawatt metallic fashions, as in a head-to-toe silver couture ensemble.

“It’s been a shimmery and glamorous couture season, with lots of dense and sparkly embroideries,” wrote WWD’s Miles Socha of Kim Jones’ gossamer T-shirt paved with glistening embroideries and silvery bugle beads within his couture collection for Fendi. “Jones held his own, reprising some ‘shattered-mirror’ dresses Karl Lagerfeld did for Fendi in 2000, and paving lean, minimalist dresses with gleaming beads and embroideries,” Socha wrote.

At Rahul Mishra, the designer went bold with gold, with opening looks blooming with golden foliage-inspired embroideries, like a minidress with flared, spangled skirt or a thigh-length, gold-hued striped jacket dress. “Mishra didn’t stop there. He interwove the gold theme with vivid, colorful floral embroideries. Those appeared on the likes of a V-neck dress with golden embellishment on the torso and embroideries from the waist down of small flowers, houses and rabbits,” Jennifer Weil said in a review of the gilded collection.