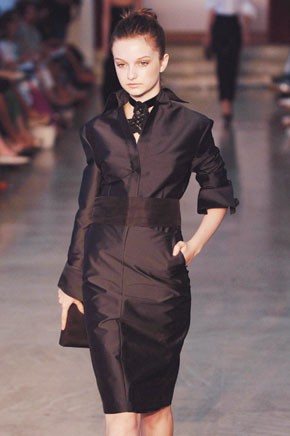 SAO PAULO — Designers at Brazil’s two main fashion events set off in strikingly different trend directions, and, coupled with a wide range of prices, offered retailers a bounty of choices.

This story first appeared in the March 7, 2008 issue of WWD. Subscribe Today.

The upscale São Paulo Fashion Week features pricier apparel than the more commercial Fashion Rio. But at both editions, cheaper, lesser-known brands that offered something fresh caught more buyer attention than some of the bigger labels, in part due to the stumbling worldwide economy. Foreign retailers at SPFW, in particular, shunned expensive designers because of high dollar-based export prices — a result of the dollar having depreciated against the local currency, the real, by 50 percent since 2003 and by 13 percent since mid-2007. The exchange rate has stabilized in recent months, however, and the dollar’s depreciation appears to have stopped.

Both of last month’s biannual events, open to the public, drew the usual-size local crowds and a slightly more international crowd than last year. Each drew lots of European, Middle Eastern and some Japanese retailers. But SPFW drew few, if any, North Americans, who flocked to Fashion Rio’s lower prices.

SPFW, in the nation’s fashion capital, attracted 72,000 visitors and 35 foreign buyers, a mix of department and chain stores, boutiques and buying agents, while Fashion Rio, in Brazil’s tourist capital, boasted 80,000 visitors, with 91 foreign buyers from 26 countries, mainly boutiques, purchasing agents and distributors. At both fairs, 10 percent of attendees were trade, organizers said.

In one change from SPFW’s January 2007 event, there were no showroom exhibitions this year, compared with 68 on-site showrooms last year.

The fall collections of the 39 SPFW designers and the 46 Fashion Rio stylists featured more black or black-and-white and less gray than last year. And at both editions, jeans flared slightly and were worn higher, in contrast to the tighter, tapered fits, worn lower — Saint-Tropez style — that dominated last year.

“The main trends at SPFW were an unusually large variety of knitwear, high collars, and, to a lesser extent, cowboy/western-inspired apparel,” said fashion consultant Gloria Kalil. “The main trends at Fashion Rio couldn’t have been more different, and were highlighted by pencil skirts and dresses, bows, a lot of checkered patterns, and a limited variety of knitwear.”

“Foreign buyers at SPFW may be pulling away from established designers because these stylists aren’t part of their core business,” said Robb Young of Diptrics. “So, to spice up their core business, they can just as easily opt for cheaper, lesser-known Brazilian designers.”

This was the case with Rahon Cyril, a Galeries Lafayette buyer.

“Because we have carried Herchcovitch, Santos and Lourenço, I’m looking for price-competitive designers my clients don’t know so I can offer them something just as fashion-forward, but much more fresh,” said Cyril, citing Maria Bonita’s oversize wool jumpsuits and cardigans.

Other foreign buyers flocked to under-the-radar designers because they better suit their clients’ tastes. Karen Harries of Boutiqueye said, “I always buy emerging labels, not established ones, because they have a more embellished look my clients in Dubai, Abu Dhabi and Mumbai want.” She plans to buy Fábia Bercsek’s caftan-shaped black jersey dresses with metallic-square detailing, and Giselle Nassar’s oversize silk caftans with patchwork detailing.

Malak Beydoun, creative director for Aïshti, is buying emerging designers for a similar reason. “The Beirut women who buy at Aïshti are looking for sexy and/or slightly flashy clothes and I found that SPFW’s lower-end brands fit that niche,” said Beydoun, who said she would buy Iódice’s multicolored short dresses and Zoomp’s strapless little black dresses.

By contrast, Cape Town retailer Purr’s clients prefer more minimalist, casual-chic styles. “Most of the SPFW’s main houses are too dressy and detailed for my boutique. So I’m buying those lesser-known names that offer simpler, sportier clothes that still have a romantic edge,” said owner Francisca Herloff-Petersen, pointing to Uma’s black and red, mandarin-collar wool jackets with rose details.

Nakajima, one of the few foreign buyers to attend both SPFW and Fashion Rio, said, “Whereas SPFW stylists have high-end, fashion-forward apparel, Fashion Rio’s designers have cheaper, lower-quality, more commercial clothes. But if you’re looking for fall clothing with the colors of spring, you should go to Fashion Rio.”

Leyla Canbaz, with Atlantik, a Turkish distributor who supplies three high-end Istanbul department stores, scored at Fashion Rio with Coven’s multicolored, long-sleeved, cotton knit bubble dresses. “Turkish women like Brazil’s bright colors and apparel that is feminine without being too sexy,” she said.

Kathryn Adams, a buyer for Closet Fever in Melbourne, plans to buy Magathus’ slinky, vibrant-colored jersey dresses, with face and body-motif prints because “Australian women love this lively, Brazilian look but I can’t find it in Australia.”

Jill Bradshaw, owner of the iHeart boutique in New York’s SoHo, was looking for classic but original apparel, mainly knitwear, for fall, and found it at Maria Bonita Extra, Cantão and Coven, where she planned to place $6,000 to $7,000 worth of orders. “These three Fashion Rio brands offer versatile, day-into-night wear at prices quite competitive with the European, U.S. and Asian lines I stock,” said Bradshaw.

Meanwhile, Bart Klerkx of Porto, a San Francisco-based distributor to 300 American boutiques, found similar low-cost, classics at Lucidez and Mara Mac, which he said “appeals to the more conservative tastes of American women. Mara Mac’s loose cowl-neck, long-sleeve knit top, or her deep-V-neck cashmere jacket, if worn with a spandex tank top, can be sensual, without being overly sexy.”