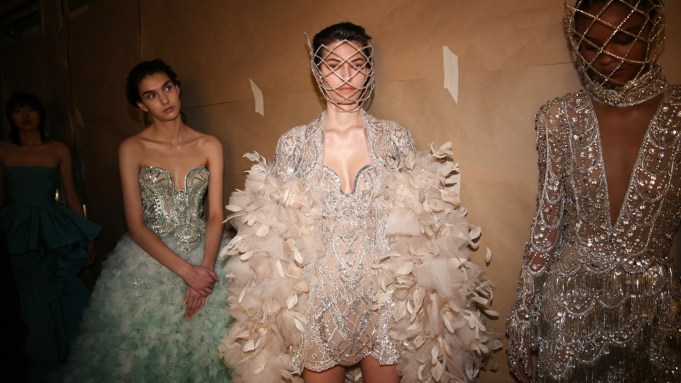 With Paris Couture Week returning to the physical runways, players big and small dialed the drama up to 11, to the delight of live audiences — including the clients back in their front-row seats.

A sign of this exuberance were the grand gestures that emerged as a trend of the spring 2022 couture runways.

In the Carreau du Temple, Elie Saab showed his optimistic mood, with a display bursting with his signature brights. Inspired by the Garden of Eden, or at least the Mediterranean, with gowns in bougainvillea pinks and orchid purples, he pumped up the volume from his opening strong capes, which set the tone of the show, to his signature gowns.

At Schiaparelli, stripping back Daniel Roseberry’s signature color and billowing volumes in favor of a more essential interpretation of the house’s Surrealist codes made for a flamboyant lineup, which merged the showmanship of the Ziegfeld Follies with the drama of sci-fi costumes.

As the second guest couturier at Jean Paul Gaultier, Glenn Martens made good use of the “only one time in my life when [he] can do a gown with a 15-meter train” in designs that looked like a fog of molded black organza enveloping the silhouette, or trailing crinkled, undulating mounds of fabric that brought to mind a tongue of lava.

Including bodies of all genders and ages was how Pier Paolo Piccioli made a sweeping overture at Valentino, relishing the challenge of creating couture outfits that would best dignify and exalt the beauty of each individual, achieving the purpose of couture in the first place.

Not all gestures required acres of tulle — although those are par for the course at Giambattista Valli. After a tidal wave of Omicron cases caused him to forgo his show in favor of “The Valli Experience,” it was a hand in the pocket of a floral brocade haute couture gown that set the tone to this freewheeling mélange of pre-fall ready-to-wear and haute couture that describes how the couture client’s wardrobe “is becoming larger and larger.”

Others, including Rahul Mishra, Yuima Nakazato and Ronald van der Kemp, channeled exuberance in craft-intensive techniques, be they smocking, embroidery or the careful juxtaposition of materials. For Viktor & Rolf, it was a protective shrug that created the “Surreal Shoulder” the couture artists described this season, with this lineup nodding to the Old Hollywood depictions of Dracula.

As for emerging whizkid Charles de Vilmorin, he went for the grandest gesture of all: setting one of his colorful designs ablaze.