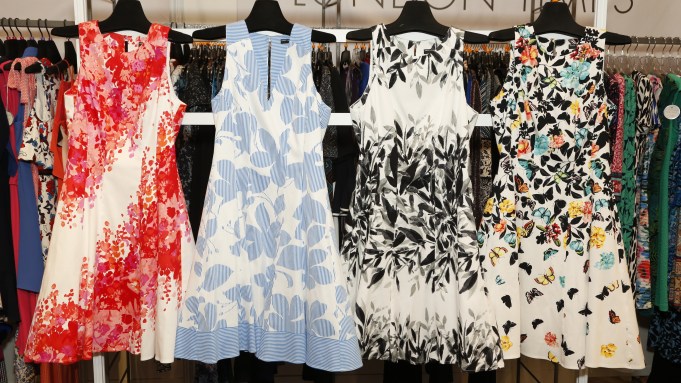 Prints were the star attraction at Moda, while denim was still the go-to item at Fame, although possible early trends include non-stretch denim fabrications and faux-fur body-lined outerwear.

Both shows were held at the Jacob K. Javits Convention Center in Manhattan, which began on Sunday and runs through today. The vendor base for Moda seemed smaller than usual, but that’s likely due to August being when buyers are eyeing mostly immediate deliveries. Typically the much larger Moda show is held next month at Javits. The opposite was true for Fame this year, as the vendor base for the younger contemporary marketplace seems to have grown from May’s show. It too has a follow-up show in September, also at Javits.

One Moda vendor that was catching some attention from buyers was Moonlight Exclusive, which featured a number of black jackets with Japanese-inspired prints along one side. The jackets were mostly rayon and acetate, although polyester was incorporated in some of the fabrications. Also popular were jackets in the black-white-red combinations, as well as black jackets with red trim, according to owner Connie Pae. Wholesale price points ranged from $59 up to $129. Buyers at the show who stopped by were mostly boutique owners and reps from catalogue companies, she said.

At Maggy London, the brand’s representative Steve Waldheter was showing the new lineup for daytime dresses and special-occasion options in some solids, but mostly prints. The resort collection also featured mostly prints, particularly in the cotton fit-and-flare style. Typically featuring a jewel neck, the brand is also providing buyers this time with a V-neck option in select styles. Wholesale price points for the dresses began at $49.

At Fame, casual tops and bottoms ran the gamut from basic solids to prints. There seemed to be a few more vendors in the denim space this time around, and buyers were seen paying particular attention to details on bottoms.

Just Black Denim’s rep Christine Chung said the denim story is “all about the hem detail.” One option currently in vogue includes a higher-cut hem on the front of the leg, with a longer-length hem on the back, although both frayed and distressed hems are still consumer favorites. Price points average between $28 and $32 a pair.

“The seam is having its big moment in denim right now,” Chung said, who added that one trend that is morping is the skinny jean. That look has now evolved to the “slim straight,” a in-between that’s slimmer than the straight leg, but not as slim as the skinny leg, Chung said.

Chung also showed options that reflect how frayed and fringe details are evolving. Frayed is no longer limited to just hems on bottoms — there were a few looks that had fraying on the hems, as well as at the waistband. And for fringe, say good-bye to four-inch frayed hems. According to Chung, the newer version is much shorter at about a half-inch long and is much “more wearable.”

Over at Tantrum Ink, the brand was showing leggings that were inspired by what’s been hot in the denim market, such as distressed features like open knees. The brand’s rep Erika Rothman also showed a jogger version that had slightly more room in the leg and a cuff band at the ankle. Price points averaged $22 to $25 a pair.

Rothman also reps the brand Vigoss, which showed denim options in different washes. One popular style featured a destroyed hem at the leg. Wholesale prices were at the $32 range per pair.

Not all contemporary options at Fame were comprised of basic tops and denim bottoms. At Beulah, the line’s sales representative Luis Martinez said one popular item is a parka that has a faux fur lining in the body, which had a wholesale price point of $58. The parka, which also has a faux-fur-lined hood as well as a faux-fur ruff around the hood, is a buyer favorite, Martinez said.

According to Martinez, outerwear featuring faux-fur lining in the body is a trend that is starting to get buyers’ attention. Beulah was showing another faux-fur body-lined option featuring faux leather, with an oversized pink or white faux-fur collar. The faux-leather option had a wholesale price of $74.75.