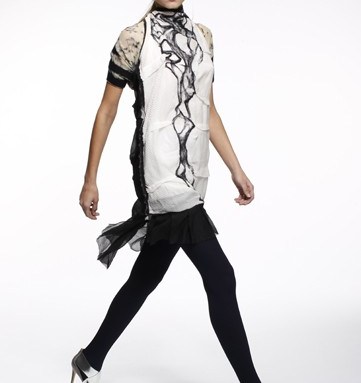 Bio: Raised in Sierra Leone, West Africa, Anyaa studied textile design at Rovaniemi University in Finland. After graduation, she designed textiles and patterns for a local architect there, later moving to Dallas, where she started her own company in 2004. That fizzled a few years later, but she is now giving it another go with an official relaunch of ready-to-wear and accessories.

Collection: Anyaa’s focus is always on the fabrics, most of which she hand-makes, treats and sometimes paints. She felts wool onto silk, cotton and linen, creating alluring patterns and textures — swirling, marblelike motifs on dresses or abstract shapes on scarves. “I think of the wool as an element of embellishment,” she says.

P.S.: Anyaa also crafts housewares, such as pillows and bowls, from her homespun fabrics.

Collection: Despite her experience in bridal and eveningwear, Carper has her sights set on the contemporary market. “I’m a casual dresser,” she says. “I want the line to reflect my lifestyle.” Hers is a life filled with wanderlust, so each collection is influenced by a different part of the world she’s visited — Mongolia for her fall 2010 debut, Latin America for spring 2011 and Turkey for fall 2011. An abstract print on easy shirts and dresses, for instance, is “a nod to the decaying marble and stone I found in the mosques,” she says.

P.S.: Before she launched her line, Carper taught in-home cooking lessons in Brooklyn.

Bio: Boston-based Jackie Fraser-Swan attended the city’s School of Fashion Design in 2009 but quit to take care of her four children. She launched Emerson for spring 2011, naming it after poet Ralph Waldo Emerson.

Collection: Fraser-Swan says she loves to mine a nature motif: “I have 80 acres that I live on with my family. There’s a big forest in my backyard. We have a lake.” Thus, she crafts her knits from nubby, textured wool and splices fuzzy mohair pockets onto simple vests and an LBD; there are also arty tree prints on silk dresses. But Fraser-Swan is also inspired by New York — “I love the energy of downtown” — which gives the lineup an urbane appeal, i.e. a leather jacket with a wide fold-over collar.

P.S.: Not only does Fraser-Swan have roots in Emerson’s hometown, but the designer says the poet is a “distant cousin.”

Bio: Linda Monaskanian is a born and bred Los Angeleno, but despite her new line of easy basics, she’s not exactly the laid-back West Coast type. “The way my mind works is very East Coast, very Europe. I like getting really dressed up — I’m not an L.A. girl whatsoever,” she says, but nevertheless she does not have plans to relocate. Monaskanian studied at Cal State Northridge and Otis College of Art and Design before working at L.A.’s TSS showroom (doing sales for Milly and Tracy Reese) and Magnolia boutique (as an accessories buyer).

Collection: Her brand is pronounced “1940,” yet there’s nothing remotely Forties about Monaskanian’s clothes. “I read somewhere that, in the Forties, ‘Linda’ was the most sought-after name,” she says. “So this represented me, but it’s not putting my actual name on the label.” The “t” hits closer to the heart of the collection, which revolves around the casual comfort of the T-shirt, kicked up a stylish notch. “My concept was to have sweatpants and sweatshirts you could wear out,” she says. “They’re not just for running your errands.” Simple terry tops come with sexy cutouts at the shoulder, while sweatpants are cut in dropped-crotch silhouettes.

Stats: Wholesales from $60 to $120; sold at Max in Aspen, Colorado; Space 519 and Trillium in Chicago; Satine and Fred Segal Trend in Los Angeles, and Curve in New York, Miami and L.A.

P.S.: All of 19 4t’s fabrics are sourced from Japan and feature a well-worn vintagelike feel.

Bio: Form and function. Many designers harp on the tricky combo, but few have the expertise of Michael Harlan, who spent more than a decade designing uniforms for Stan Herman Studio, including those for FedEx, JetBlue and US Airways. “That taught me that everything needs to have a purpose — a pocket, a button,” says Harlan. To that end, his debut collection revolves around impeccable construction and quiet luxury.

Bio: Originally from New Delhi, Shaunali Nanda received her master’s degree from London’s Sotheby’s Institute of Art in 1999 before going to work at rival house Christie’s, where she compiled the catalogue for the firm’s massive Mughal jewelry auction that year. Then came a 2000 stint at Doyle New York, followed by positions in the visual merchandising departments at Van Cleef & Arpels, Cartier and Hermès.

Collection: Basant, which Nanda launched for fall 2011, is Hindu for “springtime.” “India has such a rich resource in manufacturing and embellishments,” explains Nanda. “My inspiration is looking back at its legacy.” She does so with a light touch, adding traditional details to contemporary silhouettes: mirror accents on trim jackets; silver foil treatments, typically used as a garnish on Indian desserts, lighten up a wool skirt, and riffs on bell anklets are used on a simple coat with a bauble-strewn neckline. The subdued palette might run contrary to stereotypical Indian brights, but Nanda assures that the grays, blacks, neutrals and blues are, in fact, quite traditional. “These are the colors you see in north India,” she says. “There’s a tribe there that only wears black.”

P.S.: Her mother, Sita, an interior designer, decorated the hotel suites for both Bill Clinton’s and Barack Obama’s presidential visits to India.

Bio: Born and based in Bucharest, Romania, Marinescu has fashion in her blood ­— well, sort of. Her grandfather worked in leather, crafting handbags and small goods out of a workshop in his apartment. “I was fascinated by him,” says Marinescu, who launched her line in 2003, a year before she graduated from the Bucharest National University of Arts. She snapped up plenty of press in Romania and is a regular at Bucharest Fashion Week, but she’s only recently entered the U.S. market.

Collection: The overarching inspiration behind her line is pretty heady for what amounts to a streamlined, structured lineup: boxy tanks, wide-lapel coats and long dresses in simple cuts and an even simpler palette (blacks, whites, neutrals). “I look at the human body as an object to wrap,” explains Marinescu, adding that her steady muse is artist Lyggia Naum, wife of Romanian poet Gellu Naum and the subject of his 1985 novel “Zenobia.” “And I try to make clothes a reflection of psychological aspects.” Her line also includes leather envelope clutches.

Bio: At the age of 19, Mathieu Mirano is launching his debut collection — with the reputable Nicolas Caito, who works with Proenza Schouler and Prabal Gurung, among others, as his pattern maker. But Mirano, who dropped out of Parsons The New School For Design last year, says designing is nothing new for him. “I started making small collections when I was 13,” he notes. “I just designed things and, once I finished, would throw them in a closet and start over again. My parents haven’t even seen a lot of my pieces.” Mirano, a Long Island native, counts Alexander McQueen as a major influence, as well as Arnold Scaasi, Ralph Lauren and even Rita Hayworth.

Collection: “I’m very much about a tailored look,” Mirano says. “A woman looks best when the garment is at the smallest part of her body.” But Mirano also works a strong, graphic vibe in his tailoring, which results in sheaths traced in contrast-color piping and lean coats cut in geometric cross or stripe patterns. His nine-piece debut — cast in a palette of red, black and gray, with a slight futuristic bent — was inspired by a rather dark tale from his childhood: His next door neighbor was stabbed to death in her home. “With this collection, I was trying to discover who the man was, which is why the collection is robotic-themed,” Mirano explains. “He had to be robotic to have done these things.”

Stats: Wholesales from $600 for a silk satin cocktail dress to $3,200 for a silk chiffon and satin gown with tube detailing.

P.S.: Mirano is a self-made moniker. He was born Matthew Schmidt but tapped into his French roots for Mathieu and tweaked his maternal grandfather’s last name Cirano for Mirano.