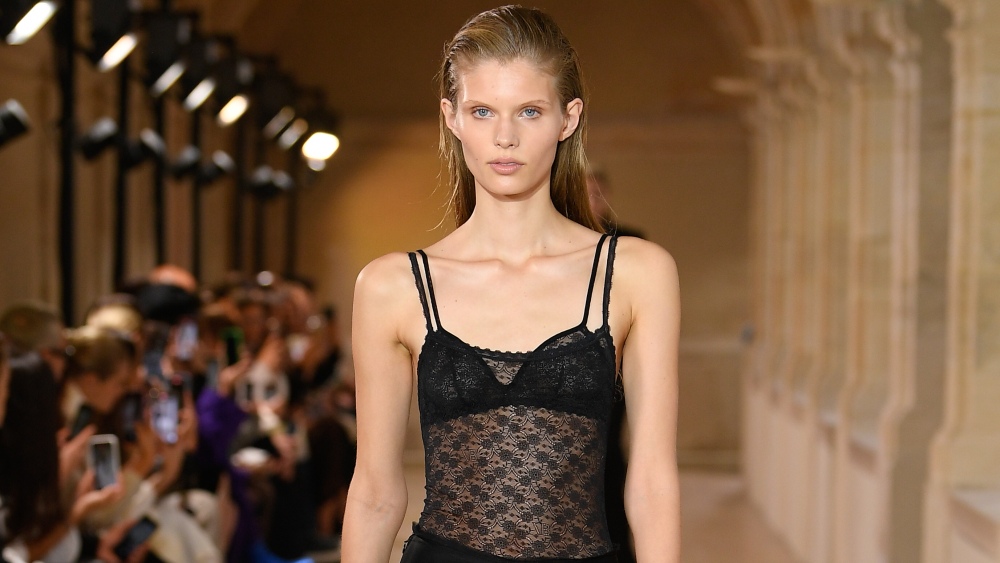 Lingerie was one of the key statements of the season from Miuccia Prada, Cynthia Rowley, Tom Ford, Tory Burch and Donatella Versace, to name a few. Skin is in, again, for the spring season.

In her debut Paris show, Victoria Beckham showed some of the best lingerie-inspired looks of the season.

“The spring collection delivered a sexier edge to the brand, with plenty of lingerie influences, lace and latex, and fresh takes on the season’s fringe trend, alongside Beckham’s trademark offbeat color mixes, featuring chartreuse, mustard, pink, periwinkle, red, black and white. There were lots of bias-cut slips, and cascading ruffle minidresses draped and cut to reveal lacy VB underthings and stockings with VB logos. Jersey dresses, ruched into a heart over the chest, had twin cutouts at the top of the derriere, revealing latex leggings underneath,” WWD’s Booth Moore wrote in her Victoria Beckham review.

Tom Ford, known for his minimalist sensuality from the ’90s, did exactly that — but for the Gen Z consumer. “Ford served up fetish wear in a commercial way, nodding to today’s gender fluidity with black leather jackets galore, lacy triangle bras and Tom Ford logo thongs for everyone. Black leather-and-lace slip skirts and lingerie-look dresses were sexy, as were black mesh body-con gowns draped to conceal and reveal,” Moore explained in her Ford review.

At times, a designer’s move toward a certain aesthetic indicated plans for category expansion. This was the case for Antonio Marras. “A plethora of frilled and laced bras worn over shirts, styled with pencil skirts or peaking from under jackets, as well as knitted culottes, basic blouses and floral hosiery didn’t seem coincidental but winked to the new business partner’s innerwear world. Yet Marras made it clear that even if he found a companion to share his own journey, he still holds the creative compass tight,” wrote WWD’s Sandra Salibian in the spring review of the brand.