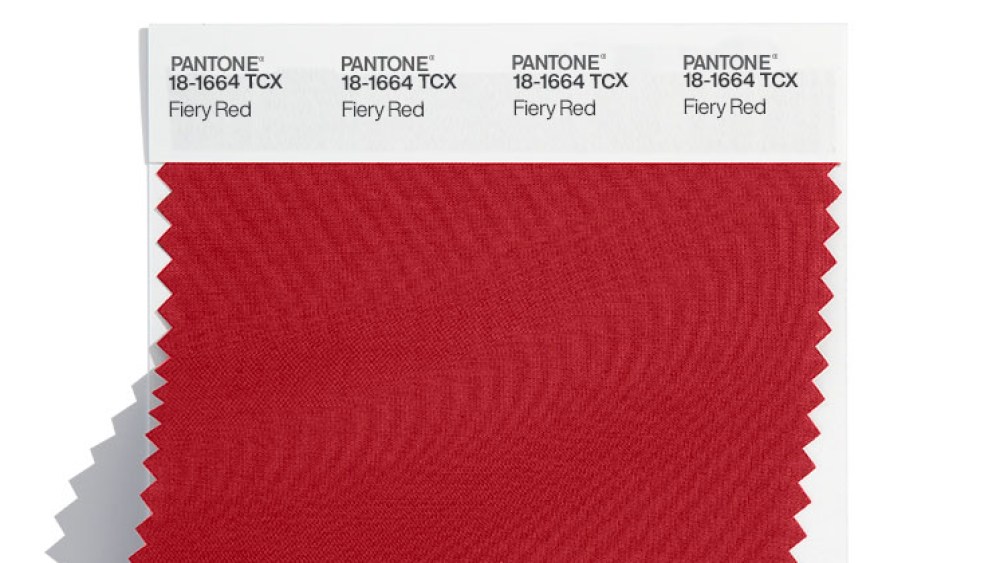 Along with so many other aspects of daily living, the pandemic has shifted our relationship to color, as evident in Pantone Fashion Color Trend Report for spring 2023.

Released for New York Fashion Week by the Pantone Color Institute, the top 10 standout colors and the five new classics shades are reflective of the past two years. Just as some citizens are eager for frenetic schedules and new adventures while others are still emerging quietly from extended at-home time, the Pantone Fashion Color Trend Report veers between the vibrant and the subdued.

From newfound emboldening hues like the overall top-three-ranked Fiery Red, Beetroot Purple and Tangelo to more calming ones like the leading classics Skylight, Vanilla Cream and Gray Lilac, the season’s lineup is equal parts uplifting and soothing. Hopeful that the spring palette will suit people’s varied needs, Pantone Color Institute executive director Leatrice Eiseman said: “What the designers have done — even though they might not even be that aware of it — is to embrace both moods that people might be in and that strong contrast.”

All of the self-isolating, telecommuting and closet-cleaning over the past two years have given millions time to recalibrate, renovate, refresh their wardrobes and reconsider how a little color can enliven their fashion sense, homes and moods. Eiseman said, “People are just being more creative today. It’s a given that the human eye is exceedingly fickle. Even though we may have a favorite color and love it for a long time, eventually it’s going to get tiresome if we use in the same way all the time.”

Following up the top three colors are Peach Pink, Empire Yellow, Crystal Rose and Classic Green. Rounding out the seventh through 10th slots are Love Bird, Perennial and Summer Song.

”The palette reflects the contrasts that we have going on in our lives right now, meaning that the last few years have really influenced our relationship with color. People are more mindful of what color means to them. Even if they might not be overtly mindful of it, there is a natural reaching out to certain colors,” Eiseman said.

Social media, binge-watched streaming series, vast online shopping, vibrant book jackets, more experimental cooking, comparison pricing in the supermarket and dining out adventurously are some of the factors that are altering how the general public considers colors. Eiseman said, “There’s no discounting that the general population has become so much more involved in color because of social media.”

Along with being transportive and uplifting, these colors are “absolutely aspirational — no question,” Eiseman said.

Be it fashion, interiors, food or any sector, people aren’t just jumping on trends or acting on whims to the degree that they once did in choosing colors. There is more thought being given to those choices, even if it is subliminal, Eiseman said.

“The effect that color has is so much more appreciated now. A lot of that came out of the pandemic, after being sequestered and being more thoughtful about things. You’re not frantically running around from here to there. You have a little more time to think, to study, and ponder. That’s definitely made its way into the world of color, regardless if that’s in fashion, home or product development.”

Popular streaming series like “Bridgerton” and “Indian Matchmaking” are also having an impact on how people look at color and the influences that are out there, Eiseman said. “We spend a lot of time watching these shows, and it’s bound to have an effect. I keep going back to the word ‘subliminal.’ Sometimes people aren’t even aware that color enters their stream of consciousness. But color does. We play on what we see even though sometimes we don’t know that we are.”

Subliminal color messaging, if you will, could be happening, too, in supermarkets, as many price-conscious shoppers are moving more slowly to keep costs down. And colorful merchandising is prime (as indicated by canned goods-laden Neiman Marcus window displays.) Eiseman said, “There really is this attempt to make the produce sections so gorgeously designed now, and the takeout sections and the floral ones. Now every market has a floral department. You are surrounded by all this color. People are being more thoughtful about what they’re buying and are moving more slowly [through the aisles]. This does have an effect on how that color is absorbed, how you are attracted to that color and if it makes you want to buy it.”

Looking at designer runways and how stars are wearing colors, “there’s no escaping the fact that Fiery Red is very much still in the picture,” according to Eiseman. Zendaya stole the show wearing a fiery red midriff-baring Vera Wang gown at the CFDA Awards, and Timothée Chalamet wore a backless red jumpsuit last week on the red carpet at the Venice Film Festival. Cartier’s and Dior’s fall ad campaign features this deep red.

As the name suggests, this bold fuchsia depicts the fruits of nature. “We have become a nation of foodies, because it’s such an interesting conversation [to have]. People have become more experimental with the way they are cooking and what they’re cooking. They’re also getting out more and experiencing new tastes and drinks. We are looking for things that are little bit more different than before and more experimental,” Eiseman said. This partially red-charged color qualifies, too. From the ultrachic Valentino to the more in-reach Alo Yoga and Lululemon athleisure, this invigorating hue is already prevalent. Beetroot Purple is sure to give Barbiecore a further boost.

Not just for lifeguards, traces of this powerful orange can be seen in logos for Hermès, Veuve Clicquot amd Dunkin’ alike, as well as in styles from Proenza Schouler, Collina Strada and Versace. This vitamin-enriched orange “gives more strength through nutrition so that we can literally taste the color,” Eiseman said.

In February trendsetting Rihanna wore a peach leather minidress to the Off-White show in Paris. This soft nurturing color relays the public’s interest in wellness, nutrition and in healthy foods, according to Eiseman. Peloton worked Peach Pink into its activewear. But fashion fans, foodies and home decorators alike agree on the appeal of this hue, Eiseman said. “It definitely has to do with the idea of  let’s-fill-our-bodies-with-food-that’s-good-for-us. Health is such a huge priority,” she said.

Offering a ray of sunshine, this radiating yellow is another reminder of “how we are getting away from the overcastness of the pandemic and into the sunshine,” Eiseman said. Olivia Wilde made her presence known on the red carpet at the Venice Film Festival wearing an Empire Yellow gown. Gucci, Off-White, Mugler and Voice Of Insiders have already worked this shade into athletic-inspired styles.

With a bit of a sparkle, this clear pink is not another dull pastel. A romantic and nostalgic tint gives this glimmery rose a modern touch. While rose quartz is said to enhance feelings of self-love, Crystal Rose is a flattering color for many. Prabal Gurung is among its many fans.

Vibrant and healthy, this not-to-be missed green is prime for athletic and athleisure brands, as well as designers who are not too afraid to play up bold colors. Paging Christopher John Rogers. Carolina Herrera’s Wes Gardon had used a similar shade for an evening look. Tennis pro Venus Williams was wearing a Classic Green-colored combo, when she was recently defeated in the U.S. Open’s women’s singles competition. And Wilde once again got a jump on the spring 2023 NYFW color trend by wearing a mini-suit in Classic Green.

An energized exotic green that offers a touch of excitement to whatever you add it to — whether that be Fiery Red or Classic Green — this is “an automatic attention getter that brings a smile to your face,” Eiseman said. Hailey Bieber went with a Love Bird-inspired colored Versace dress to a wedding reception and Kylie Jenner has worn the color before, too.

Labor Day doesn’t necessarily have to mean the end of oceanside stays. This clean blue can be a reminder of open skies and empty beaches. Retailers like H&M have already been playing up soft blues, as have designer houses like Celine, Lanvin and Alexander Wang. Accessories designers like Loeffler Randall have served up versions, too.

In keeping with the potential expansiveness of colors, Skylight “instantly creates an image of light coming from above,” Eiseman said. Pangaia, Burberry and Balmain are a few early adopters of faint blues. With cleansing and purity overtones, this watery aqua tone also hints at environmental concerns — as in consumers’ concern about trying to keep the atmosphere and everything else clean, Eiseman said.

This off-white offers a deliciousness, smoothness and evocative creamy tone, Eiseman said. “We don’t talk about white very much because we consider white and blacks as givens. But these off-whites are coming across much more than pure whites,” she said. Labels as diverse as Skims and Jil Sander have taken to off-whites.

Just on the cusp of gray, this barely-there lilac has a dreaminess that could easily be envisioned in a chiffon dress. Thom Browne, Self-Portrait and Alpha Tauri featured similar shades earlier this year.

This vegetal green offers a subtle flavor to fashion and is another reminder of the greater appreciation for green as a neutral color. “Is there anything that we can’t put against green because nature uses it so profusely?” Eiseman asked hypothetically. Sixty-two percent of respondents to the Axiom Gardening Insights survey indicated they will be planting more this year. And the figure was even higher with Millennials: 76 percent.

Considering the average American drinks three cups of coffee a day, the fact that Macchiato is a spring New Classic adds up. Named for the espresso drink with one slight layer of foam, Macchiato evokes a certain airiness. Dior menswear, Louis Vuitton, Self-Portrait accessories and even J. Crew took to tan in recent seasons.