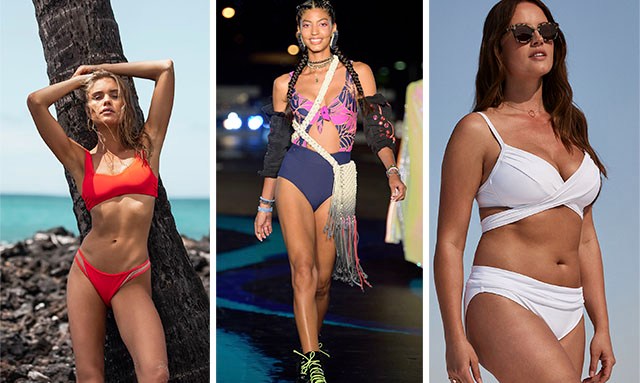 MIAMI — The weather gods were good to the Miami swim market, which flowed into Miami Beach’s sparkling new convention center, luxury hotels, parks and gardens. Aside from occasional power outages, the week went off without a hitch.

“It’s like our spirit week,” said Sydney Altschuler, an associate buyer for resortwear and ski at Moda Operandi, who hoped to find that one last gem she may have overlooked in New York or Paris. “We always save a little something for Miami.”

“Designers are playing it safe this year, but at least nice and safe beats ugly and safe,” said Gilbert Russell, president of Brio Bodywear in Ottawa. “It’s been hard to find original looks that specialty stores like me depend on, or people get bored.”

Beyond fit and fabric within thousands of lines, retailers had to factor in sustainability, inclusion, philanthropy and the Instagram age. Maaji swimwear launched the E.W. (Earth Warriors) Collection in recycled polyester with a tree-planting initiative. Rather than transfer its higher production costs to consumers, the company picked up the tab on the difference for the 25-piece capsule retailing from $90 to $240. Eberjey presented sustainable cotton and bamboo, and nylon made from recycled water bottles. The intimates and swim apparel firm also partnered with One Tree Planted for The Giving PJ, a boon for both parties.

Once an afterthought downgraded to cheaper options, the plus-size consumer was omnipresent in booths. Plus-size models wore the same styles as their svelte counterparts. Kenneth Cole New York celebrated the full spectrum of skin tones, too, by introducing Show Me Your Nudes, a group of one-pieces like its signature, strappy “million-dollar suit.”

E-commerce and social media pose extra challenges for brands and buyers alike. As the founder of the Mermaids boutique and Kai Lani swimwear collection in Miami, Jessica Corry Sierralta faces increased competition from both sides. Instagram’s advantages and disadvantages walk a fine line, according to Corry Sierralta, who uses the platform to drive traffic into the store on slow days but sprinkles in new lines that don’t have a heavy presence on it at the same time. Influencers have dived in the crowded pool, too, by launching their own swim lines.

“They all do the same suits — a nude, an animal print,” she said, placing her budget elsewhere. “I’m sticking to my loyal brands that aren’t on every corner and building partnerships with them.”

Manhattan Beachwear chief executive officer Lindsay Shumlas agreed that the barrier to enter is easy, and consumers already have access to so many brands online. The conglomerate retooled each brand’s narrative and hired a public relations firm to ramp up an overall message that it’s actually a lot harder to make swimwear than it appears.

“La Blanca, for example, is all about fit. She [the customer] comes to us for tried-and-true fits, and we’re trying to convey that to new customers,” said Shumlas.

When asked about pending tariffs on Chinese imports, she said the company can’t just move to any apparel factory due to swimwear’s technical challenges and fabrications. The shift has begun, however. Her sourcing and supply chains aren’t as concentrated in China, and Mexico, where production has taken place for a long time, accounts for only 10 percent of volume.

“We’re in discussion with Colombia, Indonesia and Vietnam. It’s an important initiative for 2020,” said Shumlas.

“You need to find lovely prices, when you have a duty put on imports,” said Jones, who cited Pranella, a resort wear and jewelry line from the U.K., as another Collection exhibitor with the winning formula. “Their price points are amazing. I sold it out to the piece.”

She also wrote at Cabana and supported its relocation to a hall in the Miami Beach Convention Center next to SwimShow. Whereas some vendors and attendees missed the former tents’ ocean breezes and bursting-at-the-seams frisson, Jones appreciated its new spacious setting and modern conveniences. Show organizers transferred the vacation vibe as best they could with a heavy Havana theme. Bongo drums resonated amid vignettes from a Ford Fairlane convertible in salmon pink to a hanging installation of Panama hats.

“I came to see my brands like L*Space and Red Carter. There’s a lot of texture, and every line has a high leg and underwire top with straps,” she said.

Boys + Arrows featured both trends. Its Cabana booth was busy, according to rep Jamie Whitney, who owns Seamless Showroom in Los Angeles. “It’s our only trade show,” she said.

Not everyone was so fortunate. Established and emerging vendors reported decreased traffic with the move and debated whether it’s worth the investment.

“We wrote majors like Shopbop and Barneys in Paris and expected to see our U.S. specialty stores who can’t afford the trip abroad,” said Guia Cleps, cofounder of Reina Olga swim, of her no-show accounts. “With so much to see, maybe they didn’t make it to our end. I may physically visit stores up and down the East and West coasts instead of doing a show next time.”

Whether to invest in a runway show or not was another hot debate. Despite production efforts, buyers didn’t fill front rows as in IMG’s heyday here. A few runway presentations still managed to make a splash, however. Gottex used the occasion to commemorate the passing of the baton from Linda Sassoon, its outgoing president North America, to Karine Laferriere. Sports Illustrated Swimsuit Issue’s inclusive moment invited the public to an open model call and the runway show.

Meanwhile, stylists swarmed the backstage of Badgley Mischka’s show for its licensed foray into swimwear with embellishment that works back to its couture eveningwear. Neiman Marcus, Nordstrom, Saks Fifth Avenue and Everything But Water have ordered or expressed interest for suits retailing up to $849, according to Arie Setton, ceo of Badgley Mischka Swimwear + Active, who also launched its licensed ath-leisure division at SwimShow.

Jenn Cermak, owner of Nani Nalu swim boutiques in Minneapolis, Kansas City and Boulder, Colo., saw no value in industry-absent fashion shows and saved her energy for long days at trade shows. With her open to buy up eight percent, she doubled down on brand partnerships like Maaji. Its “four-way style” suits in reversible fabrics that can be worn forward or backward — or as a skirt or dress in the case of cover-ups — justify her store’s higher prices.

“It gives me something to talk about with my customer,” she said.

Like most attendees, she focused on making up for a slow start to summer because of June’s heavy rainfall. Cara Williams, vice president and head buyer for Tyler’s, a Texas chain for athletic and lifestyle apparel for men, women and children, saw a boost in swimwear sales from summer camp. Compounded by a long winter, summer also came too late in Canada, according to Russell.

“Weather is always swim’s biggest challenge. Remember, there’s always a hard stop in August no matter how beautiful September is,” he said.

Criss-cross straps that tie in back bows