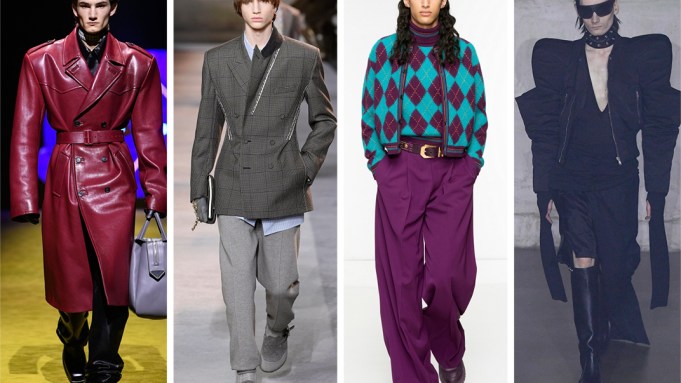 At long last, it is time to move on from overtly casual garb. Dressing up — and the return of capital F fashion — were the main messages from the men’s fall collections shown in Europe in January. Key trends included the return of the chic suit, the standout topcoat, a new take on legendary preppy and somber-yet-classic black as the main color of the season.

Prada, one of the most talked-about shows this season, presented a compelling assortment of statement outerwear. Among the best examples was a red leather belted number with extreme ’80s power shoulders. Other notables were the faux fur robe coat at Egonlab and an animal print elongated style from Jil Sander, another master of sophistication and sartorial precision.

Love or hate it, preppy is making a comeback. But don’t expect the old-school Ivy League repressed style. The new preppy plays with gender fluidity and sensuality. At Versace, the traditional argyle cardigan was turned on its head and presented as the perfect subversive country club sweater-set (all that was missing was a pearl necklace). Other favorites include a formfitting sleeveless polo romper from JW Anderson and a ’90s boxy varsity jacket from Virgil Abloh’s last Louis Vuitton, one of the best collections of the season without a doubt.

Fashionistas wearing black? Groundbreaking. Yet this monochromatic dark statement was the dominating color of the season, and managed to intrigue at that. The head-to-toe black looks not only exuded a flair of mystery but reinforced a slick, elegant and sophisticated message. Rick Owens, the king of black, continued his dark Goth exploration with a show full of directional silhouettes, while Vetements kept things darker-than-dark with black face coverings.

Kim Jones’ homage to Monsieur Christian Dior on the 75th anniversary of the French house became the most directional exercise of chic sartorial dressing. He revisited double-breasted suit classics and sent the return of the elegance trend to new heights. Brioni’s heritage never felt more timely with a lineup infused with evening references, while Ermenegildo Zegna’s exploration of the young suit felt effortless and business ready.