The gown style of the season, which WWD has coined "Prairie Dress," includes all of the volume of a traditional ballgown but with a modern lightness and ease. 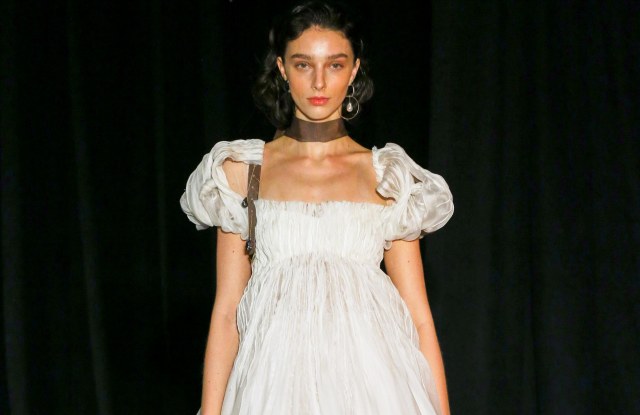 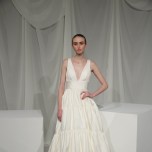 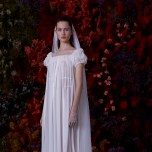 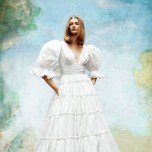 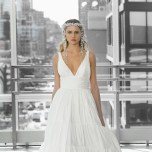 Call it prairie, bohemian, Victorian or peasant — billowy and voluminous skirts in casual and unexpected fabrics were the style of choice during the fall 2020 bridal market. Among other trends including short dresses, puff sleeves and pearl accents, prairie-style dresses stood out for its fresh update on the traditional gown. Cut with silk faille, taffeta or organza, there were underlying themes of ease, comfort and volume seamlessly blended for a modern touch.

For Danielle Frankel, a burgeoning young brand by Danielle Hirsch with a youthful, separates-driven approach to bridalwear, the trend was just one of many looks that placed an interesting spin on familiar silhouettes. “This dress is hand-tucked organza. It looks so fluid because it’s cut on the bias, veiling the lace underneath creating a slight and beautiful transparency,” she said.

Hirsch wasn’t the only designer who dabbled in tasteful transparencies for the season. Lela Rose approached the prairie trend with minimalist inclinations and a featherweight fabric, noting: “I love the ease and simplicity of this ballet bodice point d’esprit gown with flounce hem that blows with the breeze,” while Edem’s design team crafted their slightly sheer nightgown dress with historical connotations. “We draw inspiration from historical undergarments typically from the 17th and 18th centuries. In this process at times, we fall in love with the simplicity of the under dress, it’s ease and sense of fluidity. Historically, a lot of casual dresses such as the prairie dress came from the evolution of the petticoat or undergarments. In our own way, we are rediscovering this historical process.”

The common thread in design for prairie dresses lies with the tiered maxiskirt. Amsale designer Margo Lafontaine interpreted the typical “shirred tulle crinolines that give structure and volume to ballgowns” in an unexpected silk faille, while Justin Alexander Signature designer Justin Warshaw merged contemporary and bohemian styling through a taffeta skirt gown with plunging neckline. More dramatic options came from Theia and Viktor & Rolf. Theia designer Don O’Neill stated: “I decided on the three tiers so that I could add lots and lots of volume in a gradual way to the skirt,” while Viktor & Rolf designers Viktor Horsting and Rolf Snoeren wanted to balance their grand dress with puff sleeves against the nonchalance of the taffeta that is prone to crumple and create. “For all its wannabe-grandeur this gives the dress a human touch.”