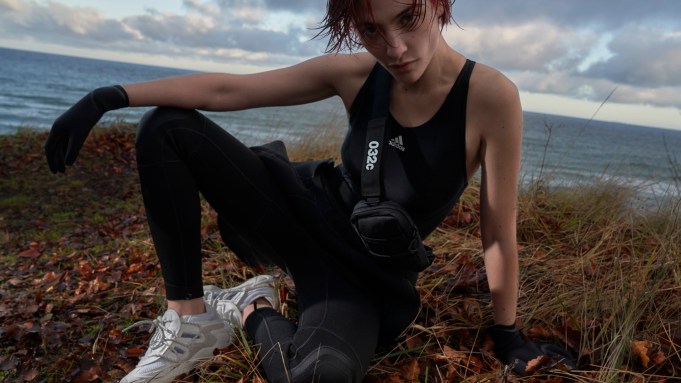 As the fashion industry grapples with the thorny issue of how to become more sustainable while still selling clothes, the focus has often been on supply chains, recycling and vintage resale. But what would sustainability actually look like, if it were a fashion trend?

Perhaps a little like the latest collaboration between Adidas and Berlin-based magazine and apparel brand, 032c. The name of the capsule collaboration, released in mid-December, was Gear for Coming Storms. The multiple straps, metal loops and military-style hardware on black backpacks, duffel bags and other accessories look more survivalist than high style and a direct comment on an uncertain future, thanks to climate change.

But 032c creative director Maria Koch said there’s more to the idea behind the products, which sold out in just two hours. “It’s not quite that direct,” she told WWD. “[As the collection was being designed] we knew it must be something modern with a precise, clean aesthetic — but without being super minimalist, or too playful.

“The question we worked on was, when there is so much out there already, what do I actually need? And why do I need this? And then: How can I make it so it’s useful – because usefulness is connected to sustainability. Something that is not a just a one-season hit, where there’s a sense of timelessness and quality. But it should also look a little dangerous and sexy,” she noted, “and still somehow be connected to the idea of fashion,” Koch continued.

Koch noted that there would be further 032c collaborations with Adidas in the near future.

Many brands — particularly those catering to younger, climate-conscious and streetwear-savvy customers who may be feeling just a little anti-fashion these days — are grappling with a similar philosophical quandary: How to engineer apparel that’s useful in any situation, and unisex, but also fashionable — and without stumbling straight into a Navy Seals’ locker room.

A number of dedicated outerwear and what are known as techwear brands — such as Alyx, Arc’teryx’ Veilance line of urbanwear, Stone Island’s Shadow Project, the North Face’s Black Series, Riot Division from Ukraine and the more flamboyant Japanese label, White Mountaineering — have dabbled with answers to that question. Italian label, Nemen, combines technical fabrics with Made in Italy craftsmanship and special dying techniques. Shanghai-based label Rosen’s X range of techwear is “genderless,” customizable and only ever made to order while Copenhagen’s Tobias Birk Nielsen made his latest collection less weather dependent, a riposte to fashion’s seasonal cycles. British label A-Cold-Wall has included aspects of survivalist style on the runway and, in a collaboration with Nike in early 2019, went against the “box fresh” aesthetic so prized in streetwear by designing a sneaker that would age faster than usual.

Cult label Acronym, based in Germany and responsible for the look of Nike’s stylish ACG line (short for All Conditions Gear) until 2018, is often referred to the original “techwear” label, having made these kinds of essentially seasonless, high-tech garments for years. Clothes come with intense attention to detail that extends to re-designed pocket interiors and complicated names like the HD Cotton Articulated BDU Trouser or 3L Gore-Tex Pro-Tec Sys Interops Jacket. The garments usually sell for well over 1,000 euros to dedicated followers that include the likes of musicians Drake and A$AP Rocky and actors Henry Golding and Jason Statham. Working with Nike made Acronym famous. Yet in interviews, the brand’s cofounder, Errolson Hugh, has expressed skepticism about doing bigger business because he likes to think high-quality, high-tech clothing like his is “fundamentally about buying less stuff.” Basically you buy one very useful, technical jacket and hang onto it until the apocalypse is over.

It’s clear that the relationship between fashion and politics around the environment will only get more complicated this year, and this decade. In their year-end report on cultural trends, the London-based fashion search firm Lyst has already reported that searches for “survivalist” looks — like utility vests, belt bags, cargo pants and combat boots — had risen by a third.