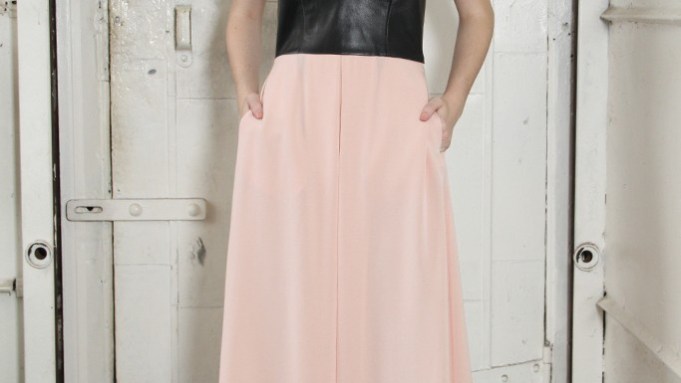 “Les Fleurs du mal” (“Flowers of Evil”), published in 1857, was Charles Baudelaire’s most influential and controversial work. Its themes of sex, death and drugs earned the outrage of Paris’ more conservative moral and legal authorities — who fined Baudelaire and temporarily censored six of his most provocative poems — and the admiration of his contemporaries including Victor Hugo and Gustave Flaubert.

A century and a half later, the volume has found a new fan in Jennifer Zuccarini, who borrowed Baudelaire’s title for her new lingerie and lifestyle collection, Fleur du Mal. “I love that it’s something beautiful but also has that edge to it,” said Zuccarini, during a preview of the line in her Baxter Street studio last week in downtown New York. “The story behind Baudelaire is very interesting. He was this decadent dandy that spent all his money on women and clothing and he was kind of tortured. I came across the name and was like, ‘This is perfect.’”

Zuccarini parted ways with Kiki in 2008, defecting for the lingerie world’s equivalent of the girl next door, Victoria’s Secret, where she signed on as design director for intimates for more than three years. “It was perfect for me to go to Victoria’s Secret because it was 2008 and everything happened [with the economy],” said Zuccarini. “I was so happy I was there and learned so much and traveled around the world.” A little over a year ago, her entrepreneurial spirit kicked in again. She wrote a business plan, raised seed investment and got to work on Fleur du Mal, which falls somewhere in between Victoria’s Secret and Kiki de Montparnasse — more sophisticated than the former, not as niche as the latter. The collection is a 70-30 divide between lingerie and ready-to-wear with French rose lace bras, panties, bodysuits and silk kimono robes that retail from $125 to $275. There are specialty corsets, some in leather, done in collaboration with Cadolle. As for the real clothes, they’re feminine with a seductive undercurrent: cotton bustier tops, silk cocktail dresses, pleated leather trousers and shorts, sheer tie-neck blouses and some lamé pieces that range from $300 up to $2,500 for a silk gown. “I really see it as a complete collection and lifestyle and all about dressing up and undressing,” said Zuccarini, noting that it’s not a quantum leap from what she was doing at Kiki. “Kiki was more about intimacy, luxury. This is ready-to-wear and lingerie.”

The other big difference between the two companies is that much of Kiki’s initial success and buzz was generated from the New York flagship on Greene Street, which Zuccarini and her partners opened immediately. This time around Zuccarini is focusing on a digital platform and e-commerce approach at least for the first year, then she’ll consider wholesale and retail options. Her Web site fleurdumal.com was designed with Base and is set up with traditionally photographed looks as well as shoppable shoots, where the user can roll over the spread and shop the items, not all of which are Fleur du Mal. To flesh out the lifestyle, Zuccarini has partnered with brands that fit the aesthetic, such as Todd Merrill Antiques, Overbey & Dunn, Carolina Bucci and ABC Home & Carpet. For example, if an ABC Carpet rug was used in one of her images, the site will link back to ABC.

If there’s one thing Zuccarini learned from launching Kiki, it’s to never underestimate the power of buzz. The label is being introduced to press and a targeted audience via traveling pop-up stores — the first opens today in Tribeca, then onto Miami, Los Angeles and Tokyo — and a series of parties designed to hit all the press-worthy notes. Fabien Moreau, the French marketing and record label executive who owns Forward, is an adviser to Zuccarini. He has set her up with Saint Michel, an up-and-coming French pop duo that has been touring with Sebastian Tellier, to play one night; Daniel restaurant’s former mixologist, Xavier Herit is creating a signature cocktail; and Mathias Spieler Bugge and Tor Jørgen Kramprud Arnesen, two private chefs from Norway who have cooked for everyone from Rihanna to the English royal family, are making a five-course tasting menu designed to engage a different sense with each course. “With Kiki, we didn’t do any advertising, and I think that’s the best way to start with a brand,” said Zuccarini. “People have to discover it, and I’m hoping they respond to it. As a start-up I have to try to be resourceful.”