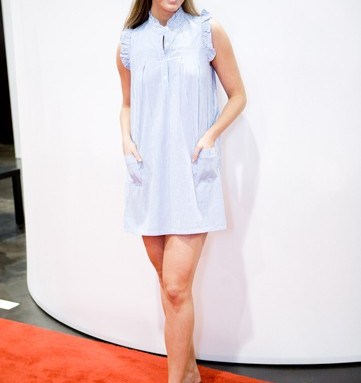 SAN DIEGO – The action sports industry sought to present fresh ideas at the ASR Trade Expo as surf and skate brands wooed cautious buyers with novelty and ventured into new categories, such as activewear.

During the three-day show at the San Diego Convention Center that ended Saturday, Quiksilver and Vans displayed swim lines launching for spring.

Quiksilver’s young contemporary swimwear premiered with six styles accented with yarn-dyed stripes and buttons. Wholesaling from $38 to $44, the line is targeted mostly to fashion boutiques.

Vans, the Cypress, Calif.-based skate brand owned by VF Corp., unveiled three bikini styles, sold separately at $15 apiece. Seeking to meet retailers’ needs for value-added items, the most popular look was a reversible halter set with yellow and turquoise checks on one side and solid turquoise on the other.

Roxy, the junior brand owned by Huntington Beach, Calif.-based Quiksilver, revealed that it will jump into the activewear market in March, when the first delivery of Roxy Athletix is slated for the summer selling season. Set to retail for less than $100, Roxy Athletix aims to add a feminine touch to athleticism in the way Stella McCartney did in her collaboration with Adidas.

Also new to ASR was City of Commerce, Calif.-based Golden State, the young contemporary line launched in May by Rampage founder Larry Hansel. Golden State found an audience for bohemian-chic looks, such as a $25 blouse stitched together from a magenta-tinted rayon-blend body and a netting top appliquéd with floral patches. “we¹re bringing fashion to the surf market,” said Hansel, seeking to hit $10 million in wholesale sales in the first year.

For example, Matix, a clothing brand owned by Podium Distribution in Torrance, Calif., skipped ASR for the first time since the brand  was established in 1998. Because Matix¹s deadline for taking spring orders had expired on Aug. 29, Podium Distribution decided to save money and exhibit in the January show instead.

The brands that did attend were confronted with merchants worried about the market’s health. “The economy is a big-time concern for us, and it’s definitely affecting the way we¹re buying, and the number of orders we will write,” said Marilyn Spatz of the newly opened Movement Skate Shop in Los Angeles’ West Valley.

Drew Mearns, owner of Anti Gravity skate park and store in Williamsburg, Va., said times are tough. “I’m looking around and trying to weigh the options before deciding” whether to place orders, he said.

Novelty was key. Hurley tested retailers’ budgets with rayon-Modal Ts and tanks wholesaling for as much as $19 to $23. “Some people are willing to pay for quality,” said Jenna Woodhull, director of merchandising at Nike-owned Hurley, based in Costa Mesa, Calif.

After several seasons of dresses’ dominance at retail, skirts began making a comeback for spring. Vendors from Lost Enterprises to Reef to Roxy doubled – or even tripled – the number of skirts for spring from a year ago.

Befitting teen customers, hemlines hovered above the knee. Hurley cut ribbed cotton into a $21 high-waisted tube miniskirt accentuated with a visible zipper running down the back. Roxy offered versatility with a $24 cotton voile skirt featuring a smocked waistband that allows the piece to be worn as a skirt or strapless dress.

Vendors piled on details to stand out from competitors, especially as buyers sought statement pieces. One tactic was to mix and match materials. Reef, the Carlsbad, Calif.-based surf brand owned by VF, integrated an ikat-print knit tank body with an embroidered racer back glittering in metallic thread and a bold star print, all for $20 at wholesale.

“They want all the bells and whistles, but they want it cheaper than before,” said Lindsay Henkels, who manages sales and marketing for Lost’s juniors business in Irvine, Calif.

Many designers continued their infatuation with bright colors, such as Eighties-influenced neon. While purple was carried over from the fall palette, yellow shone for spring. In swimwear, pinks, oranges and greens were typical of the neon palette, and Body Glove supplemented its 2009 lineup of solids with those colors.

However, Ezekiel, Insight and Quiksilver¹s young contemporary lines opted for muted colors. Ezekiel used men¹s shirting material for a $22 sleeveless shirtdress whose red and blue stripes were washed down. Insight spruced up chambray in a $32.50 racer-back dress with striped trim.

In denim, junior brands took their cues from the premium denim market. Roxy and DC Shoes, which is also owned by Quiksilver, offered bleached denim and boyfriend jeans. Fox moved the allover print from tops to bottoms, plastering leopard spots and zebra stripes in tonal hues on denim miniskirts and shorts.

The numerous swimwear launches continued at ASR for spring. In addition to Quiksilver and Vans, Zoo York, Few, Latitude 10, Vitamin A Silver and Hurley Premium joined the club.

Across brands, reversibility was a key theme. Vitamin A Silver, which retails for about $110 compared with Vitamin A’s core brand, which costs from $160 to $180, and Latitude 10, a line aimed at female surfers desiring style and function, both kicked off with all reversible suits. And swimwear stalwarts such as Roxy, Hurley, Raisins, Reef and Salinas promoted reversibility as a key selling point. “Especially in this economy, you want something you can get a lot of mileage out of,” said Beatriz Camacho, Salinas’ sales and marketing assistant.

In terms of silhouettes, triangles, halters, hipsters and tie sides stayed on top of the bikini heap. However, Hot Tuna, Raisins, Quiksilver and Body Glove introduced underwire that they contended could gain popularity in future seasons. One-pieces were already making headway. At Insight, which sells swimwear to Urban Outfitters and Diane’s, girls have been wearing the cutout one-pieces on the town with pants or shorts, said national sales coordinator Megan Nakazawa.

Nervous about resistance to higher-priced accessories in an action sports market characterized by bags retailing for less than $50, some vendors pulled back from leather. Fox, a champion of the expensive skin in recent seasons, exhibited a spring accessories collection without it. Dakine, which had offered a style with leather touches in the past, opted for canvas this time to reduce the retail price by about 23 percent to $50.

A few brands plowed ahead with leather bags, however. Alpinestars highlighted a suede clutch with pyramid studs, Hurley displayed cracked leather styles, and Nixon’s leather bowler and tote were front and center at the accessories brand’s booth. “In our market, the more premium accessories are harder to sell,” admitted Mia Enriquez, Nixon’s public relations and advertising coordinator. “But years ago, people said you can’t sell a $125 watch, and now they want a $1,600 watch.”