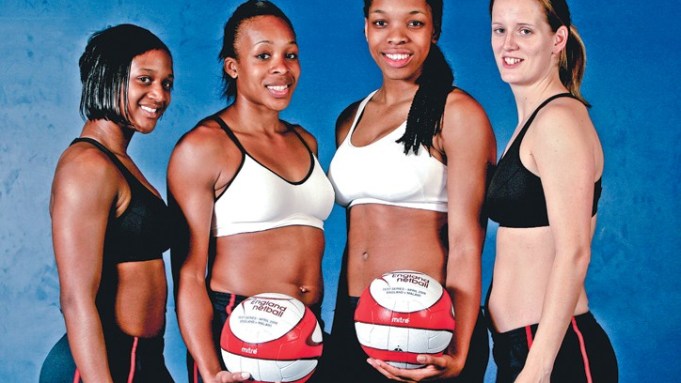 PARIS — Athletes look for an edge to improve their performance, and now that quest has reached a new level — technologically advanced undies.

Several brands are in on the action. For example, Puma, the German activewear giant, outfitted all Jamaican and Moroccan female athletes at the Olympic Games in Beijing with pieces from its new bodywear range. French Taekwondo champion Gwladys Epangue was among the Olympic athletes outfitted in Adidas’ new Techfit innerwear range.

“Our aim is to give the athlete the possibility to enhance his or her performance, to give that extra X percent,” said Barbara Ebersberger, category manager for Adidas’ women’s training lines.

She said tests on designs from the brand’s women’s Techfit range for spring revealed an 8 percent increase in speed performance, as well as greater jumping heights, aided by strategically placed TPU (thermoplastic polyurethane) “power bands” adapted to the female form. The straps come positioned in the triangle between the shoulder blades, say, or around the breasts, or line the legs of long shorts to cushion thigh muscles.

At Nike, “we are constantly in competition with ourselves to come up with new innovations that help athletes perform better,” said spokeswoman Kilee Hughes, adding that the brand, which tests its product on elite athletes as well as everyday consumers, uses its Revolution Inside technology in key pieces of women’s competition apparel. Female athletes dressed by Nike include Maria Sharapova, Kara Goucher, Kaitlin Sandeno and Jessica Mendoza.

This spring, Nike will introduce its Dri-FIT fabric Revolutionary Support Bra, to retail at $70. Using no-sew technology, the lightweight bra features a 360-degree exoskeleton for compressive support, along with adjustable motion control straps.

The race to dominate the sports innerwear sector is a multipronged assault with brands adapting lines to a broad spectrum of disciplines.

For spring, Adidas plans to launch a spin-off Techfit line, for example, geared to high-impact forms of yoga. “In terms of innovations, it is moving toward style as well as function,” said Julia Nolan, marketing manager of Britain’s Shock Absorber.

Known for its high-impact-friendly bras, Shock Absorber — official supplier to England’s national netball team — counts among its recent innovations gel-padded hooks and eyes for comfort when exercising lying down; lightweight, moisture-wicking fabrics designed to draw moisture away from the body, and revolving clasps.

In the U.S., Champion holds the top spot for sports bra sales, a sector that generated $5.5 billion from June 2007 to May 2008, according to market research firm, The NPD Group.

Upping its visibility in the sports arena, last fall, Hanesbrands inked a deal that positioned Champion as the official activewear sponsor of the ESPN Sports Complex, formerly Disney’s Wide World of Sports, which included naming rights to the complex’s 9,500-seat Florida stadium. With more than 1.1 million visitors and an estimated 240,000 athletes attending events at the stadium each year, Champion has been testing fabrics, fit, technologies and garments on athletes who visit the complex.

For women not headed for running tracks, it’s features such as invisible support, femininity and comfort that count. “Most consumers are looking for comfort first,” said Nike’s Hughes. “The biggest problem to solve for the consumer is reducing motion and chafing.”

“The most significant change in demand is that women are participating in many different types of exercise so they want their innerwear to be as versatile as their workout,” said Hall.

Feminizing sports innerwear represents a key growth opportunity for brands, said Nicolas Deconninck, owner of the Paris-based women’s activewear chain Attractive. “Shock Absorber recently released a bra line with a Wonderbra-like push-up effect that has been extremely successful,” he said, adding that demand for sports lingerie in the store has risen about 15 percent in the last year. “Women are after glamorous [sports innerwear] with invisible support. Gyms are meeting places nowadays, and are filled with mirrors, so it’s only natural that they want to look good.”