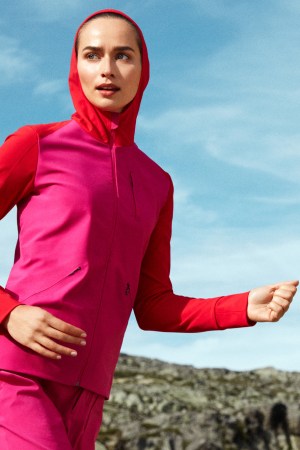 Just don’t call this line of sport separates for men and women  “ath-leisure.” Instead, cofounders Arendt van Deyk and Nadine-Isabelle Baier prefer to describe their brand as “filling the gap between fashion and function without compromises in aesthetics, functionality and performance.”

The 19-piece running collection, which launches this week, fills that gap by way of premium materials, minimalist design, and eco-conscious production. Included are solid and color-blocked tops, vests, shorts, running tights, hoodies and jackets that can be worn both in the race and post-run.

Fabrics include merino wool and high-grade technical fabrics, and the line is made in Portugal according to eco-sustainability guidelines.

“The [Aeance] collection is fashion, and this is what I am used to, but it is also functional sportswear, which is new terrain for me,” explained Le. “We discussed together which direction the collection should go in, and from this point I had creative freedom.”

Prices for Aeance start at 140 euros, or $150 at current exchange, for a pair of 3/4-length merino-mix running tights, and go up to 415 euros, or $445, for a breathable stretch wind jacket with bonded seams and laser-cut detailing. They will be sold on the brand’s Web site to start, with broadened distribution possible in the future.

Arendt van Deyk also oversees Vandeyk, a bicycle design house, and he and Baier have spent years in digital communication and marketing at Mercedes-Benz; they are also avid runners. The duo created their brand name by pulling letters from their concept’s key words: “aesthetics, athletics and performance.”

Stuttgart-based Aeance will choose a different designer to work with, from Germany and abroad, for each non-seasonal collection. The next talent will be revealed when the second Aeance release is unveiled, slated for spring 2016.