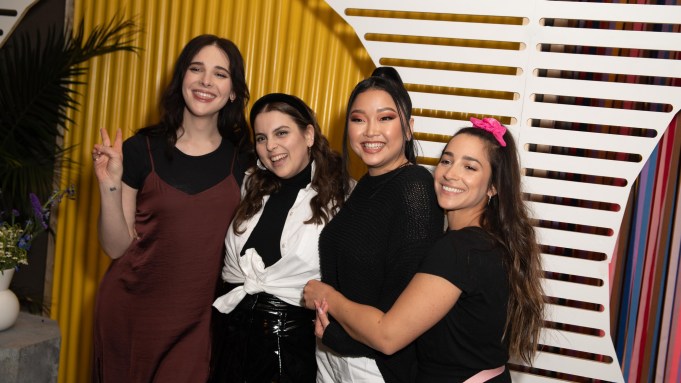 BROOKLYN, N.Y. — Fears of the coronavirus didn’t stop Aerie from celebrating the ladies.

More than 300 people — including Aerie fans, executives, friends of the brand like author Katherine Schwarzenegger and model Hunter McGrady, and 12 of the 13 AerieReal role models — flocked to New York City’s Dumbo neighborhood for the sold-out AerieReal Summit, the intimate brand’s first, on International Women’s Day on Sunday.

But instead of high-fives and hugs, attendees exchanged air-kisses and elbow bumps. That’s because only a day earlier, New York Gov. Andrew Cuomo declared a state of emergency thanks to an increase of confirmed coronavirus cases in the state.

Still, attendance was “beyond expectations,” Stacey McCormick, senior vice president of Aerie marketing, told WWD. “We didn’t know with all this media happening right now with the coronavirus; we weren’t sure if people would show. But everyone’s here and we’re excited.”

The all-day event was held at the upscale 1 Hotel Brooklyn Bridge and included panel discussions on things like sustainability, love and success and Schwarzenegger talking about forgiveness in honor of her new book, also about forgiveness. Attendees sipped on green juice smoothies, potted do-it-yourself air plants and took turns talking to the role models in the “Real Talk” booth.

“International Women’s Day should be every day,” said Raisman, who has been with the brand for three years. “It’s incredible to see the progression with the role models every single year. I think we’re all here because we relate to the brand and want to make changes.”

“What’s so interesting about the women that Aerie picked is that we’re all on these different paths,” Kutcher said. “It’s our job to cheer each other on. I think that girls compete and women empower.”

Actress and model Hari Neff added that she was apprehensive about partnering with the retailer.

“I definitely had my defenses going up going into it,” she explained. “It’s because they’re letting me get away with doing stuff like this [event] that I’m like, ‘OK. This is good; this works.’ [Aerie is] basically giving me a platform, investing in my voice. They’re not necessarily trying to twist it to just sell stuff.”

All of the role models were there except snowboarder Brenna Huckaby, who recently gave birth.

McCormick said the brand, which is owned by parent company American Eagle Outfitters, plans to host more events, such as the AerieReal Talks that happen in Aerie stores and even taking the summit on the road to other cities and college campuses around the nation.

“If this works out great — which we’re really feeling great about the energy and everything so far — we’ll look to do more of this type of event,” she said.

Aerie was one of the first innerwear brands to feature so-called “real women” modeling the products — complete with all their flaws, like stretch marks and cellulite — back in 2014. Since then, the fashion industry has followed suit, making diversity and inclusion the new norm.

In fact, the brand continues to take market share in the U.S. women’s intimate apparel space — 3 percent in 2018, up one percent from a year before, according to Euromonitor International.

Jennifer Foyle, Aerie global brand president, said the brand is nearly at its one-billion-dollar revenues goal — and then plans to aim even higher, for $3 billion.

“It’s not easy to grow a brand today,” Foyle said. “It has to have a purpose. And I think with the authenticity that we deliver in Aerie, the community just wants to be part of it. And the community is our customer.”