The brand is stretching in new directions under new owners, Four Holdings.

LONDON — Agent Provocateur is regaining its swagger, embracing curves and diversity and looking to attract a broader audience in what has become a wide-open landscape for lingerie.

In this post-#MeToo era, with Victoria’s Secret under fire and a host of new labels popping up at a variety of price points, Agent Provocateur is aiming to preserve its place in the high end of the market, and project itself as a forward-thinking brand.

The company has expanded into bridal, and is opening stores with a rosier and brighter interiors concept. AP is also building out wholesale, again, and said it views itself as a fashion and lifestyle brand by women and for women — of different body shapes and backgrounds.

The latest brand campaign says it all, with a legion of athletic bodies at the barre, dancing, sweating or bouncing their pelvises up and down to the beat of the hip-hop classic “Pump Up the Jam” on the gym floor.

On Valentine’s Day, AP dedicated a campaign to “loving yourself,” with Charli Howard, the model, author and body positivity ambassador, penning a love letter to her face and figure.

“We’re all women here, we’re all different shapes and for us it’s important that women understand that we are inclusive and always have been, way before the word inclusive became a big deal,” said Sandra Mertens-Lustig, who serves as joint managing director with Kerry Neill. 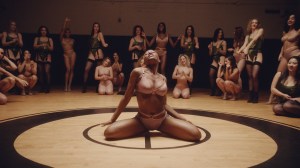 Both executives were appointed joint managing directors of AP in 2017, after Four Holdings, the brand and showroom owner, purchased it out of bankruptcy protection.

“We are who we are, and we want to evolve — but we can never ‘not’ be who we are. We are provocative, we are about sex and empowerment. All of those words are very important to our core,” she added.

While sex will stay on the agenda, they’re seeing it through a commercial, 21st- century lens: Models, some slim, some fleshy — all healthy looking — show off the lingerie, which comes in a range of sizes, with bra cups that go up to F.

“One of the other big misconceptions about the brand was that we only catered for small sizes, which is absolutely not the case,” added Mertens-Lustig, who said the range of body types on show has been driving higher-value sales on the company’s web site, which has been revamped and burnished.

Prices range from 75 pounds for an everyday bra up to 2,500 pounds for certain gowns. One of the current bestsellers, the Dora, a see-through bra, costs 125 pounds.

“We’re also very much focusing on the Asia market now, too, so we have to be mindful of smaller sizes. We’re trying to please everyone. One of our bestsellers is the Felinda, a push-up bra that works really well for all sizes,” said Mertens-Lustig. The padded, plunge underwire Felinda costs 75 pounds.

Mertens-Lustig said diversity in lingerie has become an important word, nodding to “new kids on the block, like Savage x Fenty, which are doing really well in pushing that size diversity.”

There are a host of others, including the start-up ThirdLove that recently received additional funding of $55 million, which the company said it would use to expand its assortment to an even wider demographic of women.

Aerie, the lingerie brand owned by American Eagle Outfitters, has been notching impressive growth in sales and profits, while the British brand Lemonade Dolls launched last year with a pop-up at Topshop and operates on a subscription-based model.

Launched by the singer-songwriter known as Lemon and by Caren Downie, the founder of British women’s wear label Finery, the underwear is emblazoned with slogans such as “My Pants, My Rules,” “Not Your Babe” and “Fight the Fight.” It is aimed at teens and Gen Z. Their debut campaign showed women of all shapes and sizes in images that are Photoshop-free.

Despite the negative attention, Victoria’s Secret is still the leader in the intimates category, taking about two-thirds of market share and selling more than $3 billion worth of lingerie in 2018. 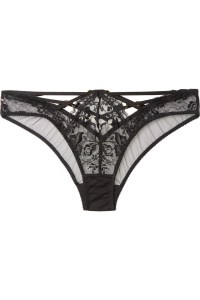 At AP, the new Bridal collection reflects the brand’s desire for diversity. The pieces — lingerie, robes, nightgowns, kitten heels — are meant for brides-to-be as well as bridal parties, honeymoons and resort wear. AP offers a customization service, too, for the bridal pieces, such as silk robes that can be monogrammed.

The bridal collection will be sold at stores including the brand’s stand-alone units in London and Paris and in the U.S. on Madison Avenue in New York, Rodeo Drive in Beverly Hills, Miami Bal Harbour, and the Las Vegas Forum, and at stores such as Harrods and La Rinascente in Milan.

The team has also been working on its distribution network, opening stores in Miami, at de Bijenkorf department store in Amsterdam and at Bicester Village in England over the past year. AP plans to relocate its stores in Prague and in Las Vegas. The latter will be the brand’s largest new concept store and will have a VIP room.

Both will open in early summer with the new interiors concept which Neill, the co-managing director, said is lighter than ever before. “We have a whole host of shades of pink — that’s very much our color, we own it. It’s a more tonal, modern palette, much more subtle and with beautiful gold, curved railings. It works really well,” she said,.

The brand has 53 boutiques in 13 countries, with most of the stores wholly owned.

Wholesale is another route to market that AP is pursuing. In the past, it shunned the channel and only used it to distribute a secondary line called L’Agent, which was designed by Penélope Cruz and her sister Mónica Cruz and which has since been shut.

The company already distributes its swimwear through Net-a-porter, and plans to expand its offer on the site later this summer. The brand is also present at Lane Crawford, with two stores in China and two in Hong Kong, and the brand sits on the ready to wear floors.

The brand has also dusted off its e-commerce site, treating it as another store. The company is also planning to launch new product categories, which are meant to work both in-store and online.

“E-commerce had been used very much as a discount site. A lot of stock was pushed through during the summer and winter sale seasons. So we entered a stage of re-education,” said Mertens-Lustig, adding that AP is now “telling much better product stories, and I think that has helped e-commerce tremendously.”

Over the next month, the brand plans to go on Tmall, having launched with Alibaba toward the end of last year.