Soccer's biggest star is ready to launch his own brand with a bodywear line and a new fragrance. 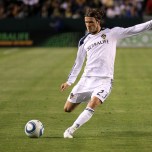 That’s what David Beckham and his business partner, Simon Fuller, are gearing up to accomplish this year with the launch of a men’s bodywear line, a new men’s fragrance from license partner Coty Inc. and a number of other projects on the drawing board — all capitalizing on the global commercial appeal of the world’s best-known soccer star.

The L.A. Galaxy midfielder has been busy working with a design team for his long-rumored bodywear line, confirmed Beckham to WWD. The new fragrance, called Homme by David Beckham, will be in stores this September. It joins existing scents David Beckham Instinct, which launched in 2005, and Intimately Beckham, a his-and-hers duo with wife Victoria Beckham, which was introduced in 2006.

“It’s not my natural inclination to see myself as a brand, I’m just a person who has been fortunate to explore other interests and passions outside of the game I love,” said Beckham of his upcoming off-field ventures with Fuller. “I will always be associated with my sport but I am now working across other areas that will continue long after my career has finished.”

Beckham was the world’s fifth-highest-paid athlete last year, according to Forbes, taking home $43.7 million in salary and endorsements. His current and past endorsements, include Emporio Armani, Adidas, Electronic Arts, Diet Pepsi, Yahoo, Castrol, M&S, Motorola and Police sunglasses. Beckham, 36, and Fuller are mapping out a long-term strategy that will keep the soccer star’s name in the spotlight — and a steady stream of income flowing to the business partners — once he retires from the game.

“As David’s career changes, and his playing days near an end, we will have the necessary time to really focus on the development of our business,” said Fuller. “David and I have a number of ambitious and exciting ideas in development across a broad range of categories. The next 10 years will see David evolve into being recognized, not just as an iconic sports figure, but also as an important entrepreneur.”

Fuller — best known as the mastermind behind the “Pop Idol” and “American Idol” franchises, as well as the Spice Girls — is the chief of XIX Entertainment, which he founded in January 2010, following his departure as chief executive officer of 19 Entertainment, which he sold to CKX Inc. in 2005. Apart from Beckham, the new firm manages the business interests of Victoria Beckham, designer Roland Mouret, Formula One driver Lewis Hamilton, tennis star Andy Murray and singers Annie Lennox and Carrie Underwood, among others.

A new logo has been created for all of Beckham’s commercial ventures in order to create a uniform visual identity for the brand, whether it be on his own branded products, such as underwear and fragrance, or endorsed products, such as his Adidas lines — which now include a soccer performance range, an Originals collaboration and the youth-oriented Adidas Neo collection.

The mark was created by Alasdhair Willis, founder of Announcement Creative and husband of designer Stella McCartney. It features the David Beckham name in the Replica Pro font, with a circular hole punched out of the script. The hole is meant to reference both a soccer ball and a lens or viewfinder, which can spotlight a product detail or visual flourish on various marketing materials.

“The major challenge when creating the brand identity for David Beckham was: how do you convey through a brand mark the sheer diversity of the David Beckham world?” said Willis. “The identity needed to represent the future of the man as well as being true to his core DNA as one of the world’s most respected and talented sportsmen. The identity needed to deliver against all these elements and at the same time be cool, relevant, desirable, versatile and accessible.”

Fuller added the David Beckham brand should be aspirational, optimistic and inclusive. “Even when he faces adversity, he does so with positivity, humility and determination, and his brand will reflect these qualities,” said Fuller. “When you have a brand born out of such distinctive and remarkable personality traits, it has so much more authenticity than a brand that is just conjured up to fulfill a gap in the market.”

The catalyst for the David Beckham bodywear line came following Beckham’s four-season stint as the face and body of Emporio Armani underwear, in a global advertising campaign that launched in February 2008.

“I have had the idea of doing a bodywear collection for some time now. The push to do something of my own really came as a result of my collaboration with Armani,” said Beckham, rattling off some sales figures. “They told me that their gross turnover in 2007 was around 16 million euros [$22.7 million at current exchange] and after the campaign in 2008 it went up to 31 million euros [$43.9 million] in 2008. It proved to me that there is a real market for good-looking, well-made men’s bodywear.”

Beckham added he has already completed some design and merchandising work on the line — and that fans should expect another eyeful of his skivvies-clad, tattoo-covered body when the collection launches, at an unspecified date down the road. “With my team we have spent time working on the fit, the fabric and the style to ensure the product looks and feels the very best and I am hugely proud of the end result. I can’t wait to show people the collection — although I’m not sure my mum will be too happy seeing a billboard image of me in underwear again.”

Asked if he thinks about what the impact of his retirement from soccer will have on his marketability, Beckham was quick to point out that he intends to keep playing for several more years. However, “I would go as far as to say nothing will be affected, it will become even stronger as I have more time to dedicate to those areas,” he said of his eventual retirement from the soccer pitch. “I want to get involved in the process and have an influence over the end product. Whether it’s with Adidas or Coty, I have always worked very closely with them to give my input. I have lots of ideas for my own collections that I’m looking into with my partner, Simon Fuller, but for now my focus is on bodywear and fragrance launches coming later this year. It’s important that with my team we take our time, to make sure that each product is thoroughly researched and then launched with the opportunity to succeed.”