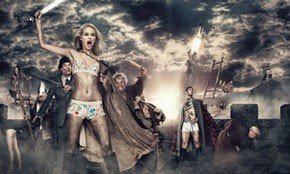 Tennis champion Björn Borg is hoping to serve an ace to the U.S. market with a namesake collection of underwear for men and women launching in August.

The winner of five successive Wimbledon singles championships retired from the tennis circuit in 1983 and became a fashion entrepreneur in 1989 when he created Björn Borg underwear. The Stockholm-based $370 million Björn Borg AB, which includes fragrances, accessories, shoes and sportswear licenses, as well as 36 stores and franchises, went public last year. In addition to Sweden and the Netherlands, the underwear brand also began selling in the U.K. in 2006 in 120 in-store shops at stores such as Harvey Nichols, Selfridges and Urban Outfitters.

Now, a major focus of the company will be its first foray into the U.S. market. The initiative will kick off by developing a wholesale business and finding a showroom in New York, which will be followed next year with the opening of a Björn Borg flagship in Manhattan, said Michael Mohn, manager of the U.S. business operation. Mohn said the company is looking to hire a sales team in the U.S. and there are plans to exhibit at trade fairs for early spring selling, including Project and “perhaps a traditional lingerie show,” he said.

“One-third of traffic on the björnborg.com Web site is from U.S. consumers,” said Mohn, adding that the company plans to introduce an e-commerce site in the U.S. that will coincide with the launch of the wholesale business by the fall.

Mohn would not give a first-year wholesale sales projection, but the combined line of men’s and women’s underwear should generate sales in excess of $5 million the first full year, according to industry estimates. However, he noted total company revenues, including wholesale and retail, posted sales increases of 59 percent from 2006 to 2007. The underwear, apparel and footwear segment reflected a 53 percent gain over the same period, he said.

Borg, who lives in Monte Carlo, Monaco, maintains an active role as a brands spokesman and is involved in strategic decision-making for the company. He said he sought to start his brand with underwear because he envisioned a functional fashion product that would address his lifestyle needs, especially as an athlete.

“I wanted to create comfortable underwear for daily use, suitable for an active lifestyle,” Borg said. “At the time of our start-up in the late Eighties and early Nineties, the selection when it came to underwear was far more limited than it is today. We are one of the forerunners when it comes to underwear that is comfortable and stylish.

“The starting point for the Björn Borg brand is entrepreneurship,” he said. “I feel very proud when I see how far that strong sense of entrepreneurship has taken us, and even today, as an incorporated company, the spirit is the same as when we started.”

Borg, who said he wears his namesake underwear “both on and off the court,” described the philosophy behind the brand as “four cornerstones: stylish, sexy, sporty and comfortable.”

Regarding the consumer target base, Mohn said: “The Björn Borg customer is young, averaging 15 to 30, who has a fashionable sense and wants to make a statement wearing the underwear.”

The women’s and men’s underwear will be priced in a range “similar to Diesel,” averaging $26 for everyday bottoms to $30 for fashion items. Fabric blends with elastane will include three classifications: Fun Stretch, a 95 percent blend of cotton; Fun Comfort, a 91 percent blend of Tactel, and Fun Satin, a 93 percent blend of polyamide. Sizes will be XS to XL for women, and XS to XXL for men.