Pajama dressing and the body-positive movement is impacting the innerwear industry in a positive way. 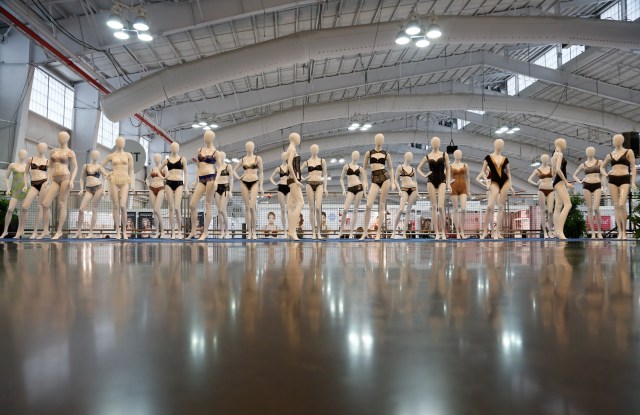 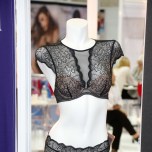 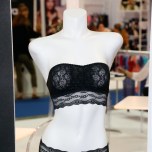 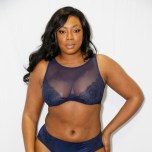 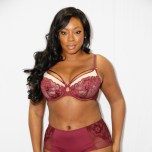 NEW YORK — The intimate apparel industry was in a particularly good mood during the CurveNY trade show, which took place at the Jacob K. Javits Convention Center this week in New York.

The body positive movement, a more informed customer and Millennials’ proclivity to wear innerwear as outerwear has benefited buyers and brands, who are introducing new categories — mostly swim, active and lounge — or doubling down on existing segments that are doing well at retail, such as bralettes and bodysuits.

“We are up 21 percent over the last 12 months,” said Jessica Pfister, vice president of Le Mystere. “Lingerie is evolving and women are embracing their bodies. They want things that are lighter and less constructed. All of this has affected us in a positive way.”

For the past couple seasons, Le Mystere, which is owned by Komar, has touted solution-based bras that can be worn multiple ways. According to Pfister, because of the Perfect 10’s success — it’s a bra that can be worn 10 ways — the brand is introducing a seven-way convertible bra that retails for $60. They are also continuing to build on their bodysuit collection with a style that has removable straps and retails for $90, and their sports assortment with a medium compression bra featuring a textured micro overlay.

Curvy Couture, which targets plus-size women with fuller busts, also had a good year. The brand’s founder, Dora Lau, said they doubled business in 2016 and the sports bra helped drive that growth — Nordstrom will carry its sports bra in an exclusive colorway for its popular Anniversary Sale. The brand will introduce compression leggings for spring, which will be around $60, and build out the active collection with complementary tops that will be available in the future. They are also expanding their Tulip push-up bra range with a strappy style. The bras are priced from $44 to $78.

A couple of brands, including Elila, a plus-size intimates brand, and Loulette, a lingerie line, focused more on prints. Elila showed a digitally printed lace bra and Loulette presented a floral robe and slipdress. Digital prints have been the calling card for Naja, a lingerie start-up that’s pursuing wholesale after successful runs with Nordstrom and Anthropologie. Naja is growing its active line, which launched last December, and introducing a swim collection that’s influenced by Morocco. Catalina Girald, Naja’s founder, is targeting the Millennial customer and competing with Aerie and Victoria’s Secret Pink, but selling at a much higher price point. Girald said she is able to appeal to this customer with functional product — the swimwear is reversible — and her sustainability and ethical message. As for underwear, Girald said this demographic prefers covered, high-waisted styles.

The intimate apparel industry at large is skewing younger, but Flora Backer, the founder of Flora Nikrooz who left the brand and launched her new collection, Rya, at Curve, believes it’s more about a state of mind rather than a specific age.

“Today’s woman takes care of herself. Age is not important,” said Backer, whose new collection has been picked up by Lord & Taylor and Bhldn. “She’s asking for something new. She doesn’t mind spending a touch more money as long as there is value.”

Backer is offering highly detailed pieces that range between $100 and $225. The Made in New York collection features bralettes covered in rosettes, hand-painted lace chemises and baby dolls with inverted pleats.

Customization is also important for this Millennial customer and Ginia, a 40-year-old Australian sleepwear brand that started selling in the U.S. a year ago, is offering silk pajama sets priced at $298 that can be personalized with appliqué patches. Changewear, a new intimate apparel line that’s based in Portland, sells a bra for $149 that comes with colored inserts that can be switched out to transform the look of the bra.

Lounge is another growing category.

“Last market we had half a rack of loungewear and now it’s two,” said Willy Mrasek, creative director for the Felina brands.

Mrasek said Felina is investing its research and development into loungewear fabrics. They showed a crushed velvet hoodie that’s $68 and matching joggers that are $48, a shawl collar spa robe that’s $98, and a Henley bodysuit that’s priced at $38. For Paramour, a Felina brand, they have introduced a new nursing bra for plus-size customers and wire free bralettes with decorative lace.

“The bralette was a trend, then it was a subcategory and now it’s an established category,” said Mrasek, who added that bodysuits are going to have a similar trajectory.

Bralettes have been a signature for Only Hearts, whose owner Helena Stuart said she picked up Heidi Klum and I.D. Sarrieri. Although she said customers are looking for sales, she’s made an extra effort to get rid of lower priced items from her stock.

Donna McNeight and Amy Dickinson, co-owners of Gazebo, a lingerie store in Northampton, Mass., were looking for fashion colors, wireless bralettes and bras for hard to fit women. They picked up Ajour and Fit Fully Yours.

Roberta Bodden, owner of Silhouettes, an intimates shop in the Cayman Islands, noticed more lounge and bodysuits. Her business had its biggest year ever in 2016. She attributes this to the economy and innovation within intimates.

“We are always finding something different,” Bodden said. “The customer is drawn to newness and variety and brands are doing a great job of providing that.”