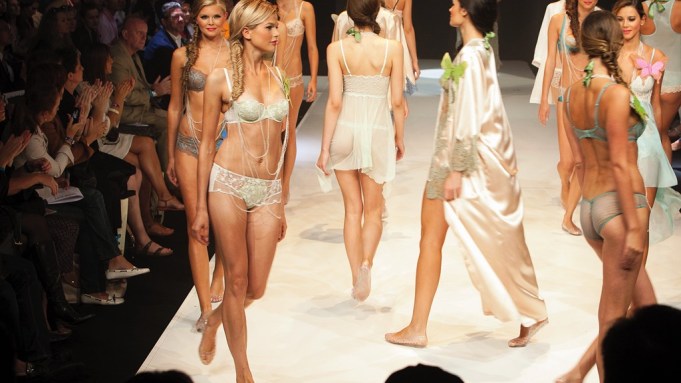 The purchase, which is estimated at more than $20 million and makes Eurovet the sole owner of CurvExpo, follows Wacoal Holding Corp.’s $243 million buy of U.K.-based Eveden Group on March 30, which spurred speculation in the innerwear industry of more deals to come this year.

While the purchase price for the Eurovet-CurvExpo deal is a fraction of the Wacoal-Eveden union, there are similarities.

Kyoto-based Wacoal is a $2.02 billion innerwear, apparel and textile conglomerate with worldwide distribution that scooped up a specialist of full-figure bras and swimwear that generates annual sales volume of $125 million, mainly in Europe. French-owned Eurovet — whose shareholders are the powerful French Knitting and Lingerie Federation and the major trade show organizer Comexposium — runs 16 textile and fashion related fairs worldwide including events in Paris, Shanghai and Hong Kong. Eurovet, with its Interfilière textiles and lace segment, is the world’s largest trade show organizer of lingerie, swimwear and beachwear. The acquisition of the smaller yet specialized CurveNY and CurveNV fairs that specialize in upscale lingerie, men’s underwear, legwear and swimwear in New York and Las Vegas, is aimed at cornering the niche trade show circuit in the U.S., and possibly Canada.

The Eurovet-Curve and Wacoal-Eveden deals share one common goal, according to Marie-Laure Bellon-Homps, chief executive officer of Eurovet: “Creating a global platform for global brands.”

“We’ve been very pleased with CurvExpo since we acquired a 30 percent share four years ago. The company has been performing very well, and we share the same values on how to service the industry. We thought this was the right time to go further and strengthen our position in the U.S.,” said Bellon-Homps, noting that the initial investment was to grow Eurovet’s international franchise.

A key area of growth will be swimwear for men, women and children as well as beachwear.

“Swimwear is a strategic line of business for us and we will be going after the swimwear market,” stated Bellon-Homps.

Regarding CurvExpo’s role in the future, Laurence Teinturier, co-founder and executive vice president of CurvExpo, said, “We will be a global enterprise and we’ll be discussing business, sourcing and distribution opportunities as well as international development with brands.”

CurvExpo co-founder and ceo Jean-Luc Teinturier said a major effort will be made to ease the transition of the new ownership.

“Over the next several days we will be meeting with all of our major brands and exhibitors such as Wacoal, Komar, Hochman, Natori, Cosabella, Le Mystere, Hanky Panky, Panache, Chantelle, Rago and Samantha Chang….No changes are planned, and Laurence and I will continue managing CurvExpo as co-presidents,” he said.

As for how the trade show consolidation will affect the official innerwear market weeks in August and February — which are not staged concurrently with the Curve fairs — Jean-Luc Teinturier replied: “It’s a challenge because most markets will be a few days apart….We are working with the Intimate Apparel Council [a division of the American Apparel & Footwear Association] to have the market weeks coincide with our shows.”

The Teinturiers will be joined by a soon-to-be-named vice president appointed by Eurovet.