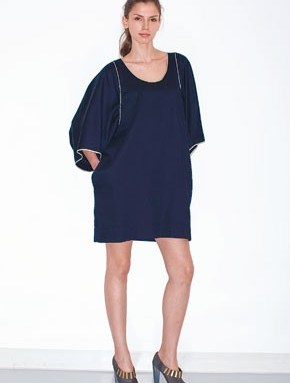 Stella McCartney could be the green “It” girl. She’s famous for eschewing fur and leather, and is the fashion industry’s most vocal vegetarian. She uses a hybrid car service and offers a carbon-neutral delivery option for her e-commerce site. And those computers and lights over at her London design offices? They’re wind-powered. So it was natural for Barneys New York to tap McCartney to create an exclusive all-organic collection last fall as part of the company’s ever-growing green initiative, and only a matter of time before she would expand it. First, she’s bringing it back home.

This June, the Stella McCartney Eco-Collection will be offered at Harvey Nichols and McCartney’s flagship on London’s Bruton Street in addition to the company’s Los Angeles and New York outposts and Barneys New York, which will broaden the distribution to its shops nationwide. “I always wanted to go beyond the one store,” she said. “Eco-friendly fashion is something I’ve always felt strongly about. You have to create a demand so the client base [for organic clothing] will grow.”

The line has 20 items in all, up from last fall’s 16-piece capsule debut. Offerings include everything from tunic dresses and breezy tops to sculpted overcoats and loosely cut suits — all rendered with McCartney’s signature louche, effortless style. “It would be weird if we made it completely alien to what we do on a daily basis,” she noted. “You should treat the design process and luxury and quality element of the product in exactly the same way. You shouldn’t have to sacrifice your style.”

Colors, which range from earthy ecrus and browns to a pale raspberry pink, come courtesy of a low-impact dye technique that involves no toxic chemicals. “It requires less rinsing,” McCartney added, “so there’s less water waste overall. It’s much more ecological than the conventional dyeing process.”

While she concedes that sourcing organic fabrics is difficult, she enjoys the challenge. “We try to make it less of a limitation and more of an excitement,” she said. In fact, she takes a broad view and some of the styles are not completely organic per se. McCartney recycles fabrics from her own archive, not to mention past buttons and trimmings for a little whimsical runway déjà vu. “You take things you’ve used before and see them with a fresh eye and turn them on their head,” she said.

And down the road will this Eco-Collection expand to categories like accessories and innerwear? Not likely, McCartney responded. “We wouldn’t need to,” she said, noting this earth-friendly sensibility has been at the core of her company since its launch in 2001. “We’ve been doing organic for years in my own collection, in my lingerie and with the Adidas collaboration,” McCartney said. “We touch on it across the board. I think it’s a bit more sincere to do that. It’s part and parcel for us as a brand.”