For fall, legwear on the runways took a turn toward soft with gauzy textures, floral motifs and light — sometimes springlike — colors. 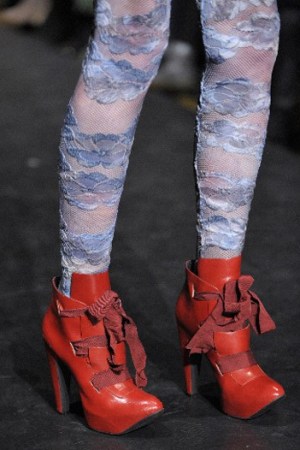 For fall, legwear on the runways took a turn toward soft with gauzy textures, floral motifs and light — sometimes springlike — colors.

This story first appeared in the March 8, 2010 issue of WWD. Subscribe Today.

Case in point: Rodarte, where Kate and Laura Mulleavy showed a beautifully embroidered sheer tulle legging, paired with knit socks in muted tones. “The legwear in our show is meant to simulate the idea of night dressing,” Kate said. “It’s a delicate reinterpretation of long johns.”

Even rocker-at-heart Marcella Lindeberg opened her Paris68 debut with a dreamy pair of embroidered sheer leggings, and Cynthia Rowley — who has been developing seriously directional tights with United Legwear for the last two years — showed superfine lace tights decorated with a pastel, printed appliqué.

But not everyone was so crafty. A few pale socks and tights had the same lightening effect on the runways in Europe. At Dior, putty-toned, ruffled socks were sweet as can be. At Gucci, Frida Giannini’s opaque tights were razor sharp but had a fuzzy texture that kept things soft. Martine Sitbon at Rue du Mail took a similar route. And at Jonathan Saunders, socks came in beige and a calming shade of pale gray.