The Year in Legs: Fifty Shades of Racy

By Laure Guilbault and Alessandra Turra on December 11, 2012
View Slideshow 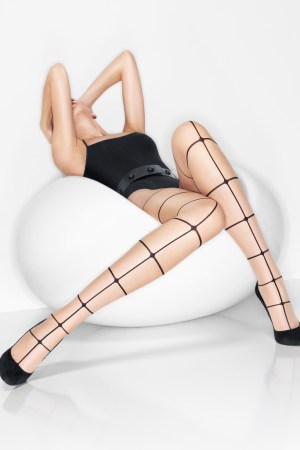 PARIS — “Fifty Shades of Grey” is heating up the legwear industry.

In step with the best-selling erotic trilogy, Wolford’s fall collection of hosiery, shapewear and lingerie was underscored by an abundance of chains, studs and metal beads. The company is continuing into spring and fall 2013 with seductive pieces, including a wide variety of fishnets. Martina Brown, head of marketing at Wolford, points out that the brand has always had a sexy edge, recalling its advertising campaigns in the Nineties shot by Helmut Newton. But she said that “Fifty Shades” has had an impact on the media and fashion industries in general, providing an extra boost. “We do satisfy the needs that have been created by the book,” she said. “Fishnets fit perfectly with the current hype.”

Kim Chi Phung, marketing manager at fiber producer Invista, noted an abundance of sexy black hosiery with lace for fall 2013, with lots of legwear done in optical effects. She has noticed a new take on sexy pieces as they go more mainstream, while still integrating shapewear properties. As for fishnets, Chi Phung said the style has become a “must-have” in every French women’s wardrobe — regardless of the popularity of “Fifty Shades.”

French lingerie designer Chantal Thomass, whose brand also has a legwear division, said all her assistants have read the book. “I think there will be an impact, the same way as there was an impact of ‘Sex and the City’ on lingerie, daring to do sexier pieces,” she said. She is now preparing her spring 2014 collection, which will be all about the “pinup style — still, very sexy and feminine, with uplifts.”

La Perla creative director Giovanni Bianchi said the success of the book drew new interest in seduction techniques and is having a strong impact on the innerwear business. “Regarding hosiery, the sexiest styles are always bestsellers, and I think that now we should focus even more on legwear collections featuring the same lace details and embroideries enriching our lingerie collections,” Bianchi said.

Italian legwear giant Golden Lady Company — whose brands include Golden Lady, Omsa, SiSi, Filodoro, Philippe Matignon, NY Legs and Arwa — is also seeing a rise in demand for fashionable tights with sexy details. “Even if we see this trend running through all our brands, it’s most evident in the luxury range, targeting more sophisticated customers,” said a company spokesperson.

And with a film adaptation in the pipeline, sexy hosiery’s sizzle might just be getting started.