Frederick’s of Hollywood Getting Back Into the Men’s Business

The ABG-owned brand is launching men's underwear and sleepwear for holiday.

A look from the Frederick's of Hollywood men's collection.

Frederick’s of Hollywood has actually offered men’s wear for more than a half century but guys haven’t had the opportunity to buy anything new lately since that category hasn’t been in the market for a number of years.

For holiday, the brand’s owner, Authentic Brands Group, is out to change that. It is reintroducing a small capsule collection and has big plans for growth in the future, especially as Valentine’s Day approaches next year.

“We’ve actually had men’s wear before, all the way back to the 1950s,” said Dana Carpenter, senior vice president of lifestyle, emerging brands for ABG. “It’s a really unique part of our archives.”

With the company’s mission to expand its audience, getting back into men’s wear made sense. “We already have a male consumer who shops with us,” she said, and ABG believes this is the time to draw him further in to the racy lingerie brand by providing something for him in addition to his significant other. For holiday, the brand is introducing underwear and sleepwear.

The line will launch on Nov. 24 and will be comprised of boxers, briefs, pants, robes, pajama sets and thongs in two styles — Brad and Dylan. The collection will retail for $29.50 to $79.50 and will be sold on the Frederick’s of Hollywood e-commerce site.

“With the way the consumer is engaging with us online and on social media, we’re excited about having a new set of eyes and a new consumer to dress and wardrobe,” Carpenter said.

Although the initial offering is small, she believes it can grow significantly, both in terms of color, prints and silhouettes that can be added in the future. Frederick’s is also looking into offering sets that are “tailored to couples: his and hers, his and his,” she said. ABG envisions a larger rollout early next year in anticipation of Valentine’s Day — a natural for the brand. 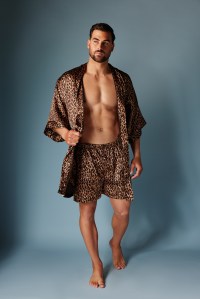 Frederick’s of Hollywood has actually had men’s wear since the Fifties.

Looking back at Frederick’s archives, Carpenter said there were a lot of tongue-in-cheek sketches of men’s wear early on in the brand’s life “that are really relevant from a couples’ perspective. We like that message, we’ll just be expanding on what ‘couple’ means.”

The initial men’s wear launch will be marketed digitally, which has been a successful strategy in the past, according to Carpenter.

“Social is huge for us. We’ve really stepped up how we speak to our audience,” she said. That includes offering more diversity in terms of size and race. “The whole proposition of the Frederick’s of Hollywood brand is inclusivity and we shouldn’t exclude the male consumer.”

The marketing push for the launch will be on the brand’s social media channels as well as through its influencer network. “This year alone, our engagement is up almost 15 percent,” Carpenter said. Last year for holiday, the brand created a short film featuring real women of varying shapes and sizes.

ABG has owned Frederick’s of Hollywood since 2015 when it purchased the brand out of bankruptcy for $22.5 million.