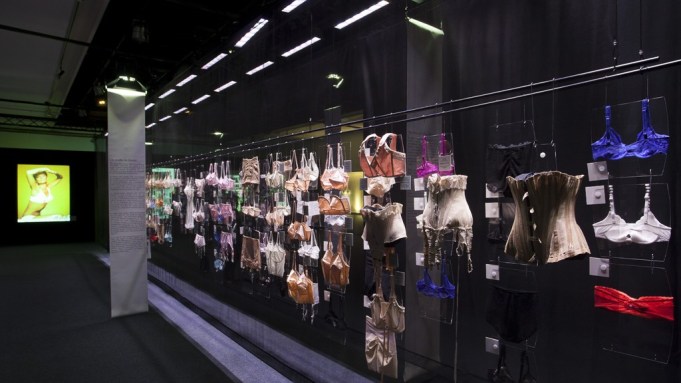 The international show, which has been featured in Paris, London, Berlin, Shanghai and Dubai, will feature 210 exhibits and examines the influence that lingerie has exerted on society and mainstream culture from the late 19th century to present day.

Exhibits will range from ancient corsets and contemporary bras to prototypes of modern lingerie that combine function and fashion. The exhibit culminates in a “Trans-Historical Striptease” — a life-size hologram that illustrates the development of lingerie and the changing female silhouette throughout the decades.

The retrospective will be supplemented by a publication of the Paris-based publisher “Plon,” which has published a book also titled “Lingerie Française.” The book, which is available in French and English, features observations from fashion historian Catherine Ormen and images by renowned photographer Gilles Berquet.

The show runs through Aug. 6 in the U.S., and will be followed by events in Toronto and Moscow. Sponsors are the French association Promincor, which promotes the French lingerie sector, and Defi, a government-sponsored force behind the label La Mode de France.

Here, a chat with Catherine Ormen, a graduate of the Ecole du Louvre and the Ecole du Patrimoine. She also was a fashion design student at the famed Studio Berçot, and served as a heritage conservator for the Fashion Museum of Marseilles before becoming the 20th century fund manager at the Museum of Fashion and Textiles at the Decorative Arts Museum in Paris.

WWD: Why are you staging this international exhibit?
CATHERINE ORMEN: We wanted to let the world know that French lingerie has a tradition, a complex tradition of good taste and high quality due to a high level of savoir-faire and a permanent search for innovation. All these reasons make French lingerie unique. It is the first U.S. exhibition. Above all, 11 brands are exhibiting all together for the very first time, even though they are competitors in real life. But here, they show their history, and they help to draw a wider history of intimacy, behavior and, more or less, a history of women.

WWD: What make this exhibit special, different from other lingerie retrospectives?
CO: The main difference is millions of items of what is exhibited have been sold. Every bra, every piece of lingerie here has been sold all over the world, and every woman can recognize her bra or brief worn years ago. Usually, we don’t keep classic [everyday] items in our personal archives. That’s the reason why it’s so difficult to find vintage lingerie pieces, because it’s been thrown away once it’s not fashionable anymore, or when it has been worn too often. “Lingerie Française” is not an exhibition of masterpieces, but an exhibition of everyday lingerie. It shows the rise of the elastic knit that made the corset more comfortable. It tells the story of nylon and democratization, thanks to the industrial means that evolved after World War II. It shows the invasion of elastane and how French corset makers have always been concerned by fashion and body contours. They were fashion-conscious, were close to haute couture and close to fashion, as Paris was considered as the capital of fashion. They helped women to achieve the fashionable silhouettes throughout the Thirties, Forties, Fifties and Sixties to present day.

WWD: How long did you work on creating this exhibit and what kind of research did you conduct?
CO: The archives of the brands were open to me, and for weeks it was a real pleasure to discover all the treasures that were kept in cupboards and small boxes.…Of course, each brand has its own history, and the brands have a lot of stories to tell — stories of the brands’ founders, stories about a particular technique or dart, about an ornament or a special lace or color…also about the ads that are related to the products. The materials were very rich. I should say that I’ve been working on this topic for years, so I already had the historical skeleton. I discovered that women didn’t forget their bras during the Seventies….Books usually say that with Women’s Lib, bras were burnt. But that’s not true. In France, the corset makers all had their bestsellers — technical and invisible bras that gave the look of a high breast of a young girl.…Women continued to wear bras and girdles [in France], but nobody was supposed to know.

WWD: How did you capture the personality of the brands?
CO: The pieces are shown in quite a functional display. The aim is to show them as industrialized products. It could have been cold and boring.…That’s the reason why we decided to reincarnate the pieces thanks to the ads. These ads talk about the feminine condition, modesty, sex and beauty. At the beginning of the 20th century, it’s only drawings. Then the illustrations became sexier with the pin-up girls of the Fifties, and then photos appeared in the Sixties. After the sexual revolution, the representation of women became more and more suggestive. As example, images in the Eighties are very hot. Then you can see a softer image of women emerge in the Nineties. These images are shown in big dioramas, including little films.

WWD: Please describe the exhibit’s holograph.
CO: The aim was to show the transformation of the silhouette, but also include hair styles, makeup and body gestures through the decades — and of course, the changes in lingerie. It’s a kind of trans-historic striptease, done with some of the lingerie items displayed in the exhibit. I think it’s a unique way to show how lingerie can help to design a silhouette.