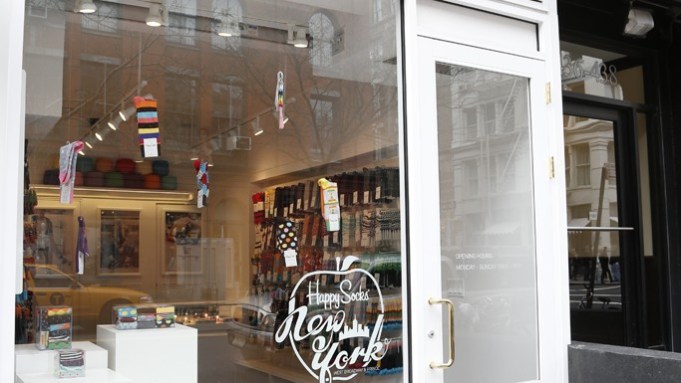 NEW YORK — Sweden’s Happy Socks will open its first U.S. store in SoHo here Friday. The 200-square-foot shop at 436 West Broadway, between Prince and Spring streets, is owned and operated by United Legwear Co., the North American licensee and distributor for Happy Socks since 2011.

The jewel box space, on a heavily trafficked stretch in SoHo, was conceived as an all-white showcase for the colorfully patterned Happy Socks designs. “We wanted an empty canvas where the socks speak for themselves. It’s like a candy store,” said Mikael Soderlindh, who cofounded Happy Socks with creative director Viktor Tell in 2008.

The SoHo store is the brand’s sixth retail unit worldwide. The company operates directly owned stores in Stockholm and Malmö, Sweden, as well as one unit in Tokyo. Local distribution partners operate retail locations in Hong Kong and Taipei.

Later this year a flagship will open in London, as well as additional units in Tokyo and Osaka, Japan. Next year a store is planned for Paris.

Happy Socks is now in about 70 markets around the world, with 60 distribution partners. United Legwear has grown the U.S. into the brand’s largest market, followed by Europe and Japan.

Happy Socks, which retail on average for $12 a pair, has helped fuel the trend of attention-grabbing fashion socks for both men and women. The brand will sell 10 million pairs of socks this year, worth about $120 million at retail, double that of 2012, according to the company.

The brand offers 80 to 100 different unisex sock styles per season. Designs come in two sizes, which are split relatively evenly in sales, indicating a solidly dual-gender customer base. “The fashion sock category has exploded, and Happy Socks is the best-known brand in the category,” said Rita Polidori O’Brien, vice president of licensing and marketing at New York-based United Legwear Co.

The brand is wholesaled to Nordstrom, Bloomingdale’s, Madewell, Crewcuts by J. Crew, Kitson and Opening Ceremony, and has grown into United Legwear’s third-biggest business, behind Puma and Skechers.