The main draw was the event’s celebrity emcee Sonja Morgan of “The Real Housewives of New York City.” 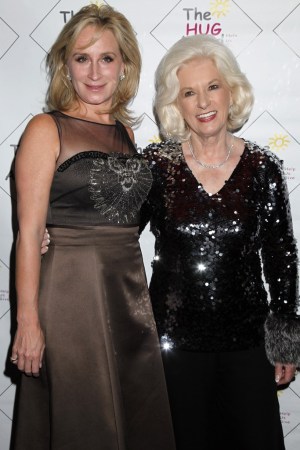 Frederick’s of Hollywood Getting Back Into the Men’s Business

It may be a challenge filling tables at charity events in a tough economy, but the HUG Awards pulled in 220 attendees at its annual cocktail and dinner party.

“I’m known on the show for my wardrobe malfunctions. Sometimes I’m known not to wear a bra at all and I’ve had my boobs popping out,” quipped Morgan.

But when it comes to fashion, Morgan said she loves to relive the moment.

“I’m like the Minnie Pearl of the Upper East Side — I keep the price tags on my clothes, my lingerie. I love a good bargain. I like to wear a great suit that I got at half price at Bergdorf Goodman.…It’s for myself, for my closet.…I can remember when I was in Paris or St. Barth’s,” said Morgan, whose financial meltdown this year has been well publicized.

Meanwhile, the HUG, or Help Us Give, event was staged at 230 Fifth Avenue in Manhattan during this month’s fall 2012 market. Hosted by the Intimate Apparel Square Club, it is a fund-raiser for pediatric services at NYU Langone Medical Center and the Rusk Institute of Rehabilitation Medicine.

The event raised $175,000, said a spokesman. There also was a silent auction with more than 50 items up for bid, including a one-of-a-kind gem: a brassiere-shaped 18-karat rose gold and diamond necklace with a retail value of $1,600. The necklace was donated by BellyBella Beverly Hills.