The comedian is the new face of the "period panties," now available in crimson color.

Ilana Glazer is walking around in her underwear.

It’s a humid September day in New York City and the Broad City alum is holed up in a Chelsea studio with peach-pink walls and a matching plush couch.

But Glazer isn’t alone. Standing barefoot in bright-red panties and a midriff-revealing top, the actress is surrounded by at least a dozen stagehands, touching up her makeup and handing her oversize cupcakes to pose with. The scene is the backdrop for the new Thinx ad campaign, in which Glazer is the star. 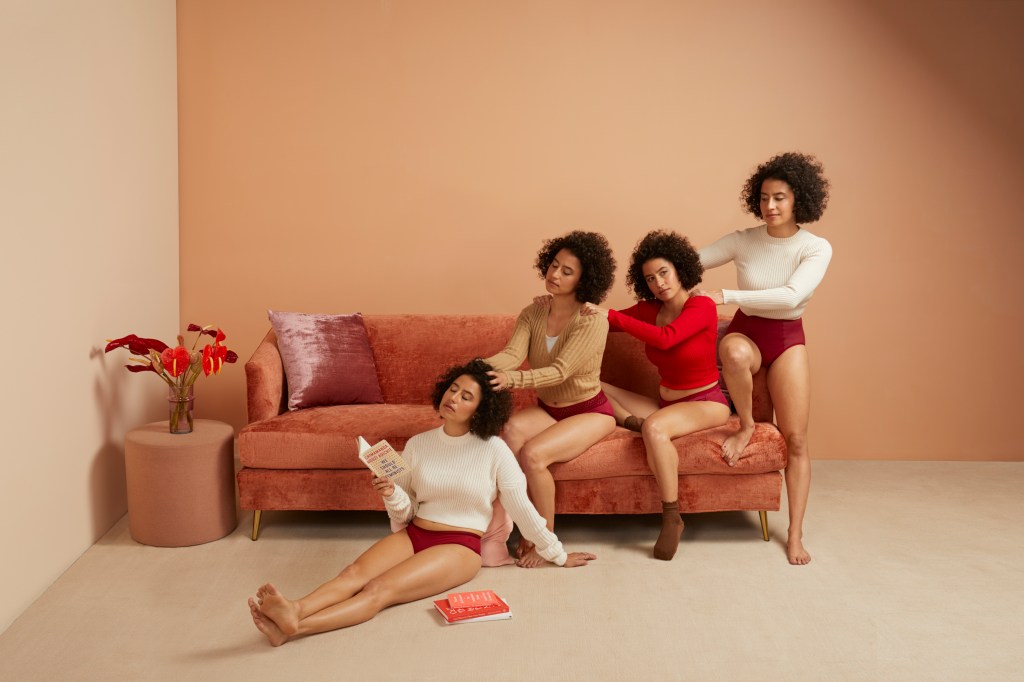 That’s why earlier this year, the comedian approached Thinx, the company often referred to as the “period panties company,” to find out how they could work together.

What resulted was a campaign centered around self-love and “literal self-care,” and a new color for the panties — crimson — available starting today exclusively on shethinx.com in high-waist, cheeky, hip-hugger, sport and thongs.

“What better color to have your period underwear in than period-color?” Glazer said.

“Thinx was such an easy brand to partner with in this mission,” she continued. “We kind of share a space in the zeitgeist, so it made sense from the get-go.”

Thinx has been disrupting the feminine hygiene industry since its inception in 2014. The company set out to make panties that women can bleed right into, eliminating the need to buy disposable sanitary pads and therefore creating less waste. Thinx also wanted to get people talking about periods, and hopefully eliminate some of the shame around menstruation, too.

But change is slow. Thinx subway ads, which included images of juicy grapefruits and dripping egg yolks adjacent to women in little more than Thinx panties on subway platforms in cities like New York, San Francisco, Chicago and Washington, D.C., back in 2015, were met with scorn. (After some pushback, the ads were allowed to run in New York City.) Then in 2017, Miki Agrawal, cofounder and former chief executive officer, was outed from Thinx after accusations of sexual misconduct surfaced. This did little to help the company’s image. 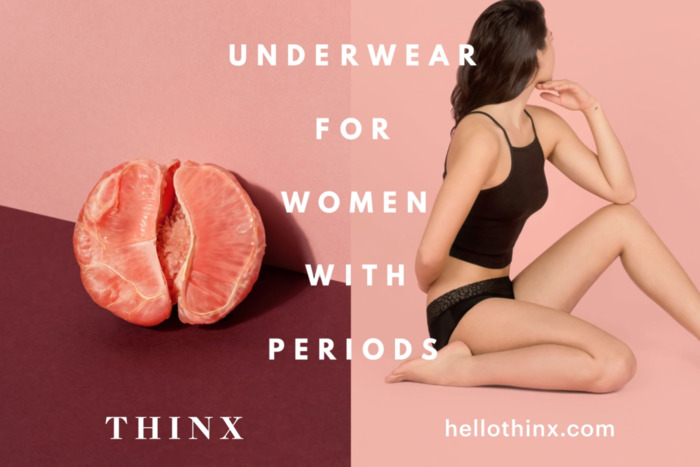 Even so, Siobhan Lonergan, chief brand officer of Thinx, said all the talk isn’t a bad thing. In fact, it’s challenging the way people think about menstruation. (A number of copycat companies have also entered the market, which Lonergan said is another sign of larger public acceptance around periods.)

“This is a new category,” Lonergan said. “Anybody that can open up the category and drive more awareness is welcome at this point, given the work that we all have to do. We’re really leaning in to our brand DNA, which is to break taboos through conversation starters and thoughtful, provoking communication.”

Meanwhile, sales have continued to increase. After reaching $50 million in revenues in 2018, Thinx relaunched its web site the following July with new logos and branding. Then in September, Thinx secured $25 million in funding from personal care company Kimberly-Clark. Lonergan said the company plans to invest in product development, including the creation of a less-expensive version of the Thinx that would be available in big-box retailers like Target and Walmart starting in 2021. Thinx also plans to use the funds to enhance its marketing efforts.

One example is the recently released TV campaign, which first aired in October and depicted a world where everyone — even men — have their periods.

“The commercials make it obvious how ridiculous it is to have so much shame around periods,” Glazer said. “Men have been taught to find periods to be scary and gross and that they should be talked about in code. Like ‘that time of the month.’ Or, ‘Aunt Flow.’ I don’t really find those coded words charming. I’d rather just hear someone say, ‘I have my period.’

“It sucks when you’re in a space and you feel like you have to hide your tampon to go to the bathroom,” she continued. “I remember being in school, putting it up my sleeve, sticking in my bra, or being slightly rebellious and having it stick out of my back pocket a little bit.”

Lonergan said it was this combination of humanity and empathy that made Thinx want to work with Glazer.

“And she’s funny,” Lonergan said. “Periods don’t have to be that serious all the time. Ilana comes across as really, really enthusiastic and she has a very unique perspective. And she’s opening up a new audience for us.”

Glazer’s enthusiasm is evident. She said Thinx is one of her favorite products.

“Their underwear is so pretty,” she said. “They makes me feel really cute and sexy.

“I have this whole basket of Thinx underwear so that I can pretty much only wear Thinx during the whole four or five days when I’m having my period,” Glazer continued. “It actually makes me excited to get my period. And it’s environmentally friendly, which I feel better about in my daily life.”

Thinx crimson-color panties range in price from $24 to $34. Other Thinx products can be found on the web site, in select Nordstrom stores and for a limited time in the recently opened Thinx pop-up in Manhattan’s SoHo neighborhood.