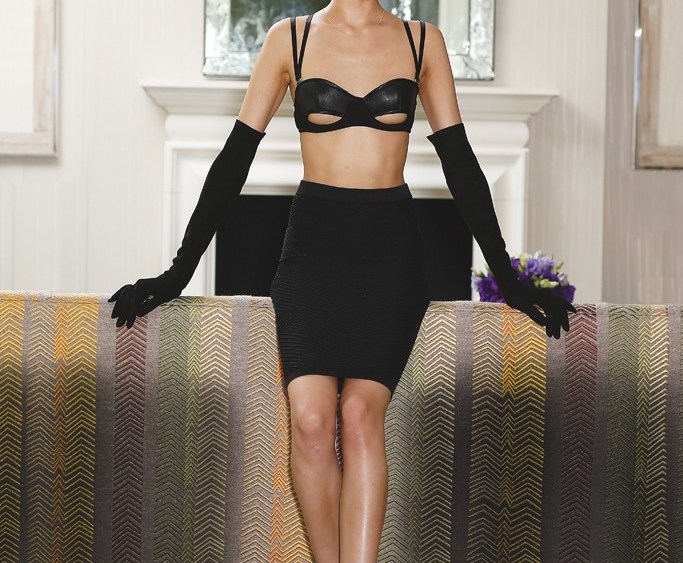 “It is only by way of pain that one arrives at pleasure,” wrote the Marquis de Sade, patron saint of bondage gear. That rule has been revised recently in the hands of lingerie designers who prefer their scandal handled delicately. In other words, lingerie for a woman who wants the attitude of S&M but is definitely not a masochist. For example, bras with small cutouts plus an extra strap or two, paired with a high-waisted panty, capture an edgy, seductive style while retaining a user-friendly comfort level.

While the Hanky Panky collection is very much innerwear to all, the most daring labels, such as Noe Undergarments and For Love & Lemons, carry styles designed to be seen, and not just in the bedroom. Noe’s Zachary X bodysuit is done in soft nude mesh with soft underwire cups and a thick herringbone T-strap back. “It has that bondage feel, but it’s for the woman who doesn’t want to take it to that extreme level,” says Noe designer Bonnie Rae, noting that it’s meant to be worn under a sheer dress or tunic to show off the upper details. “It’s wearable and you can kind of play it on the fence, but it’s not a piece for everyone.” Rae said the bodysuit is not exactly a bestseller — just three accounts picked it up for fall: Faire Frou Frou in Los Angeles; Stash at The Montauk Beach House, and a store in Australia, where the bare-and-dare trend has been going strong for a while.

Retail-wise, specialty lingerie stores will always be more inclined to buy into more directional looks, but mainstream outlets are also showing increased interest. “Our customer loves to incorporate edgy styling elements into her wardrobe,” says Jenny Fuchs, a buyer for Shopbop, which carries Hanky Panky After Midnight and picked up For Love & Lemons for fall. “These lingerie styles featuring multiple straps and peekaboo detailing give her that risqué feel, but can still be subtly feminine.”

“Women of today are being more experimental,” says Noe’s Rae. “The word ‘bondage’ isn’t as faux pas as it used to be. We use that word to describe some of our pieces, and in the past, it would be like you can’t bring that word into the collection unless you really have that dark feeling. But now, [the market] seems a lot more open to that kind of exploratory world.”

SHOT ON LOCATION AT THE MEADOW SUITE IN THE CROSBY HOTEL, NYC