The new French intimate apparel venture is positioning itself as an antibimbo brand with a feminist manifesto — and a literary bent. 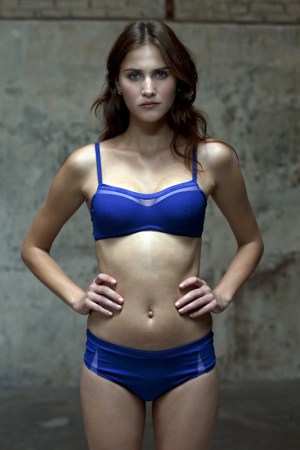 An antibimbo brand with a feminist manifesto — and a literary bent.

That’s quite a mix. It might not be the first concept that comes to mind when thinking about lingerie, but that’s just how Insensée, a new French intimate apparel venture, is positioning itself.

Brothers Kevin and Michael Hiridjee, 25 and 31, whose mother Shama and aunt Loumia founded Princesse Tam Tam, have partnered with Gael Moreau, 34 (formerly of Tam Tam), to create the brand, which they launched at the Mode City fair this month in Paris.

“Even though we are men, there is activism in our approach,” Kevin Hiridjee asserted. “Sensuality can be discreet.”

Insensée is leaving behind familiar innerwear codes such as seduction and sexiness.

The result is a chic line built with the finest fabrics, with leather, silk and even cashmere used for bras. They tapped designer Pierre Martinez of French swimwear brand Iodus for the project.

Insensée lingerie sets are priced at 120 euros, or about $150 at current exchange. Over the next 16 months, the company anticipates making about 40,000 pieces.

According to Hiridjee, Insensée sits between junior brands like Princesse Tam Tam and luxury brands playing on sexiness. The firm is targeting a more sophisticated, grown-up customer who is “fond of culture.”

And maybe even a little bookish.

“There is a way to tie lingerie and literature,” Hiridjee said, explaining the origin of the brand name: A quote from French author Paul Eluard, “Prendre sens dans l’insensée,” which translates as, “To make sense out of nonsense.”

The company has already hatched a loyalty and reward program in which customers receive a Gallimard book with the purchase of a set, either a classic or contemporary novel, Hiridjee noted, and for two sets, customers get their pick of a theater ticket.

Distribution targets include department and specialty stores, as well as company-owned retail. Down the road, the partners intend to expand through franchises.

Their first boutique is set to open in September on Rue du Bac on the Left Bank. In line with the brand’s positioning, the unit will host literary events and conferences.

In lieu of traditional advertising, the company plans a viral strategy in partnership with online city guide Mylitteparis.com.