Many say they're losing engagement and money because of it.

Wolf & Whistle, owned by lingerie brand Playful Promises, has had issues getting ads approved on Instagram.

Each day, the London-based lingerie and swimwear brand posts new products and styles for its 204,000 followers. But despite the mass following, fewer people seem to be looking. That is, since April, when Instagram rolled out a new policy — downgrading images it deems too sexy — and engagement to Playful Promises’ profile was cut in half.

“People who are following us are not seeing the content, even though they’ve elected to follow our profile,” said Emma Parker, founder and chief executive officer of the company. “It’s not banned content, but Instagram considers it racy. I’m really worried about it, because social media is one of the main ways we communicate with our customers.”

Facebook, Instagram’s parent company, laid out the new policy in April, posting on the company’s web site, “Instagram is working to ensure that the content we recommend to people is both safe and appropriate for the community. We have begun reducing the spread of posts that are inappropriate but do not go against Instagram’s community guidelines, limiting those types of posts from being recommended on our Explore and hashtag pages. For example, a sexually suggestive post will still appear in [a] feed if you follow the account that posts it, but this type of content may not appear for the broader community in Explore or hashtag pages.”

That means some accounts became suddenly less visible and users will need to intentionally go to those accounts to see the content. This, of course, limits the chance of users stumbling onto certain accounts and content. That’s bad news for swimwear and lingerie brands — especially small ones — that rely on social media to generate brand awareness.

Instagram wouldn’t release details to the top-secret Explore page algorithm. But a representative from the company confirmed that the platform’s artificial intelligence is the same for everyone; Instagram does not use different policies for different regions or users.

Just how Instagram is deciding which photos are OK for mass consumption and which ones are not is unclear. Facebook has a long history of banning female nipples, which leads some to believe the new algorithm might be catered to men. Some have hypothesized that Instagram’s algorithms detect square footage of skin. Photos with more than a certain percentage of skin showing are cast out of the Explore tab. Others think the algorithm is partial to companies with massive ad spends, like Victoria’s Secret or ThirdLove.

Either way, intimates and swimwear brands, many of which were born online, have been caught in the middle.

The 15-year-old Playful Promises had user engagement of 0.84 percent on Instagram, but within the first two weeks of the new policy, engagement dropped to just 0.4 percent.

“It’s a tricky one, because our business is actually growing at the moment,” Parker said. “But I think we’d be growing more if our engagement was better.”

In addition, Playful Promises has also had issues getting ads approved on Instagram and using the company’s new checkout feature, which allows consumers to find, track and purchase products without ever leaving the app.

And Parker’s company isn’t the only one. Michelle Cordeiro Grant, founder and chief executive officer to lingerie brand Lively, said over the company’s three-year history, they’ve had various photos rejected by Instagram and Facebook, although she hasn’t noticed a spike in rejections since Instagram enacted the new policy. Sports Illustrated model Tara Lynn, who has more than 600,000 followers on Instagram, said she’s seen her engagement and likes cut in half since April.

For retailers, brands and influencers looking to push products, decreased engagement is more than a mild inconvenience — it’s cutting into their profits. Instagram is one of the first places shoppers go to scout out new style inspirations, see how products look on other people and even make purchases.

In a statement, Instagram said the new policy, “does not affect Instagram’s feed and we will continue to show posts from accounts you have chosen to follow. We’re working to ensure that the content we recommend is both safe and appropriate for our community, and that means we are stricter about what content is recommended to people on Explore and hashtag pages.”

Even so, Cora Harrington, founder and editor in chief of the intimates apparel blog The Lingerie Addict and the Instagram account by the same name, found that she hasn’t been seeing smaller brands in her Explore tab since the new Instagram policy was instituted, despite the fact that she follows a number of lingerie and fashion start-ups.

The Explore tab is where a lot of discovery happens on Instagram. It features some of the most popular content from accounts that users don’t already follow. Each person’s Explore page is slightly different, based on other accounts followed and liking habits.

Both Harrington and Parker have, however, continued to see ads from big players like Victoria’s Secret and ThirdLove.

“ThirdLove has a massive ad spend,” Harrington said. “Their advertising is relatively innocuous. But I also see plenty of other brands with similar advertising whose brands aren’t getting through.”

Meanwhile, Playful Promises, along with sister brand, swimwear company Wolf & Whistle, have had issues using Instagram’s new checkout feature. Parker said she signed up to use the service for both brands, but Instagram would not approve anything for checkout through the service.

And many brands, including Playful Promises, Bluebella and Harrington’s Lingerie Addict, have had issues getting ads approved on Instagram.

Parker reached out to Instagram, only to be told that someone would be in touch. 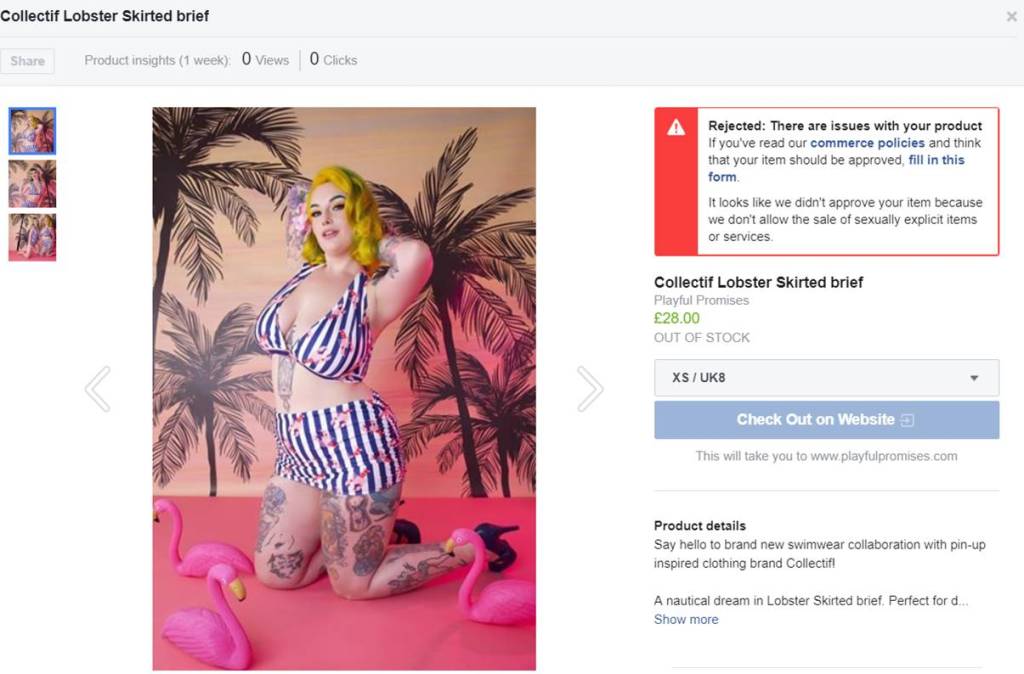 “We’re a small business. So when we appeal things, it basically goes to a moderator in a call center,” Parker said.

Harrington — who has noticed a decrease in readership to her blog, which is connected to her Instagram account — also thinks she’s too small for Instagram to care, which is why she hasn’t tried to make contact, or even apply for ads anymore.

Bluebella’s Pascoe agreed that small start-ups — even the entire niche intimates apparel market as a whole — is not sufficient enough for a company like Instagram, which reaches billions of users worldwide, to pay attention.

“They don’t care,” Pascoe said. “We’re such a small industry. We’ve reached out to Instagram. They say, ‘We have only one algorithm.’ So basically, go away. We can’t even get a conversation with Instagram.”

As for how ads are approved, Instagram uses Facebook’s auction system. The winning bidder is a combination of many things — including price, time, target audience and potential reach — and “maximizes value for both people and businesses,” Facebook’s business page reads.

Meanwhile, many intimates apparel and swimwear brands are still worried about what the policy means for the future of their companies.

“Instagram is such a monopoly,” Pascoe said. “It’s a platform that has taken over other platforms and it can break brands. The new policy is a very dangerous strategy. And it’s bad for Instagram, because ultimately they’re not getting the advertising dollars. The brands will just go somewhere else, like Amazon or some other platform, to advertise.”